Mayor McCheese to Run for Governor of Maine; Incumbent Vows to Eat Him Alive 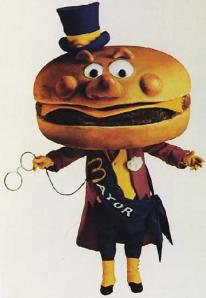 In a move that stunned political pundits throughout the state, Mayor McCheese today announced his intention to seek the Democratic nomination in the 2014 Maine Gubernatorial Election.

Incumbent Governor Paul LePage, whose approval ratings are almost as low as the current temperatures, fired back that he would “Eat him alive!”.  Having had to listen to the Governor rant and rave for the past two years, this Modern Philosopher worries that LePage (a rather hefty man) meant that literally, rather than figuratively.  Because of the Governor’s comment, Mayor McCheese has requested a security detail.

I was able to get a few minutes with the Mayor today, and he confessed that this decision came completely out of the blue.  “I had no plans to further my political career until the horrible events of the last few days,” the Mayor explained, referring to the recent arrest of his good friend Hamburglar, as detailed in this blog (The Hamburglar Incident).  “After that happened, there was such an outpouring of support for my friend and for me.  I was thrust into the spotlight and asked to appear on television and the radio.  People made it clear that they were fans of my political views.  Next thing I knew, the leaders of the Democratic Party were begging me to run against Governor LePage.  How could I not accept the call to public service?”

According to my sources inside Maine’s Democratic Hierarchy, quick polling has shown their candidate running neck and neck with LePage despite not having done any campaigning or having spent a cent on advertising.

“Every time a registered voter eats at McDonald’s, it’s a free campaign ad for our guy,” my source told me with glee.  “This election will be incredibly lopsided given the amount of fast food Mainers eat.”

What do you think, Modern Philosophers?  Do you like it when celebrities run for office?  Could a giant cheeseburger actually be a better Governor than the chucklehead currently running the state?  Do you think Mayor McCheese’s well documented friendship with a known criminal like the Hamburglar will hinder his chances?

Let me know what you think.  I can tell you, I’m excited about the future in Maine.  With the dome being built and a new man running the state, life is going to be very good…

20 Responses to Mayor McCheese to Run for Governor of Maine; Incumbent Vows to Eat Him Alive