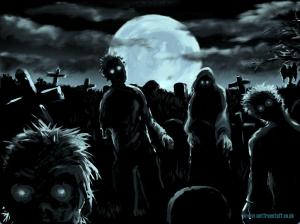 Wes Campbell, the founder and CEO of Zom-Be Friends, the social networking site for Maine Zombies, stopped by The House on the Hill this morning to talk about the site’s success…and to try to tempt me into signing up for an account.

“We have over 1,300 members, and we’ve only been live for two weeks!” Wes told me excitedly as he accessed the site on his laptop.  “Zombies have long been a part of life in Maine, and Mainers are so used to their presence that they don’t even flinch anymore when one wanders into their path.  It’s almost as if we’ve just accepted them.  Zombies are a lot like us.”

Well, they used to be a lot like us, but there are some huge differences now, don’t you think?  My guest did have a point, though.  While still a threat, Zombies are nowhere near the danger they once were.  Zombie Hunters have thinned the herd considerably, and every Mainer receives training on how to dispatch a Walker.  The Walking Dead is a work of fiction, folks.  The streets of Maine are not littered with Zombie corpses, and gunshots don’t ring out all day. 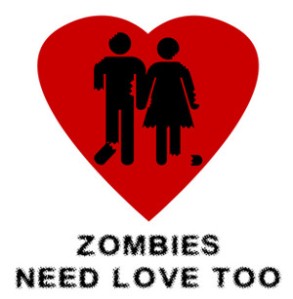 “Zombies have been misunderstood for too long,” Wes continued.  “They’ve gone through this horrible change, the life they loved is over, family and friends are gone, people run from them, fear them, and try to kill them.  That’s pretty stressful.  And it can get rather lonely.  That’s where Zom-Be Friends comes in.  We help Zombies find other Zombies with similar interests, or to find old friends from the pre-Zombie days, who have been turned as well.  Zombies can post pictures, send out undead friend requests, and play fun games.  It’s the perfect platform for Zombies to socialize in peace.”

And humans can be on the site, too?  “Of course,” Wes answered with glee as he gave me a quick tour of the site on his laptop.  “The site is divided up into zones: Zombie only, Human only, Uncharted, and The Zombie/Human Harmony Zone, which is really becoming popular.  I’d say about one-fourth of the site’s members are human.”

Really?  “It turns out humans, at least Mainers, don’t fear Zombies like the characters on TV and the movies do,” Wes replied with a chuckle.  “You gotta realize that the reason The Walking Dead is so popular is because people think Zombies are cool, not because they’re watching to pick up tips to prepare for The Zombie Apocalypse.  People want to hang with Zombies, get to know them, figure out what makes them tick.” 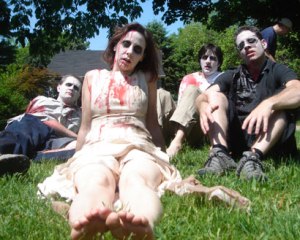 So we might all be sitting down for a Zombie/Human Thanksgiving picnic to celebrate how well we all get along?  “Well, I wouldn’t take it that far,” Wes conceded and smiled.  “I don’t think humans and Zombies should ever eat together because that would be weird and unsettling.  What I’d like to see, though, is for a human’s first instinct to be to wave hello to a Zombie, rather than to reach for that weapon we all carry for that singular, gruesome purpose.”

That last comment got me to generate some Deep Thoughts as I tapped the pocket that held my stiletto.  What he seemed to be saying was that we should give Z’s a chance.

I decided to sign up for Zom-Be Friends and have already had 16 undead friend requests.  I’m feeling very good about my decision.

What do you think, Modern Philosophers?  Do you think that Zombies should have their own social networking site, or do you fear that it will only give them a way to organize and plot The Zombie Apocalypse?  Would you sign up for such a site?  Do you think it would be too forward of me to send out undead friend requests, or should I wait for the Zombies to send them to me?

I can’t wait to hear what you think about all this.  I promise to get back to you, but it might take awhile because I’m having so much fun on this site…

Native New Yorker who's fled to the quiet life in Maine. I write movies, root for the Yankees, and shovel lots of snow.
View all posts by Austin →
This entry was posted in Humor, Love, Philosophy and tagged Humor, Modern Philosopher, Online Dating, satire, Social Networking, The Walking Dead, Zombie Apocalypse, Zombies. Bookmark the permalink.