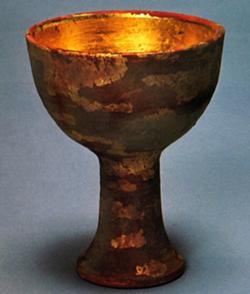 The Holy Grail, believed by many to be the chalice from which Christ drank at the Last Supper, and sought after for centuries by everyone from the Knights of the Round Table to Indiana Jones, has finally been found.

There are various legends about the Grail and its powers, but the one that always stuck with me was that anyone who drank from it would have eternal life.  No wonder the Nazis wanted it so badly!

You’ll never believe where this priceless artifact was discovered (unless, of course, you’ve already read the headline to this article)…at a yard sale in Milford, Maine!

The beat up looking goblet was scooped up by a visiting priest, Father Francis Mulcahy, for a mere 75 cents.  When Fr. Mulcahy returned to his parish in Southern California, one of the church’s historians noticed the item and asked if she could study it.  One thing led to another, and eventually Pope Francis I declared that it was, in fact, the Holy Grail!

“That would explain why my great grandpappy lived to be 135,” Danny Arimathea told this Modern Philosopher when I went back to the site of the yard sale to ask about the famous find.  “Great Grandpappy Joe drank from that cup every day.  Said it was his good luck charm and no one else was allowed to use it.” 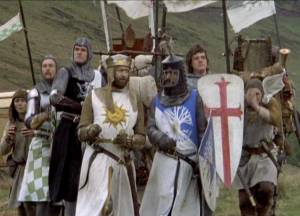 I asked if I could speak to Joe, so I could ask him how he came to be in possession of the Holy Grail that so many others had failed to find for hundreds of years.  Sadly, that would not be possible.  “Great Grandpappy Joe got bit by a Zombie last month,” Danny explained sadly.  “Was the weirdest thing, too.  The second that Walker bit into him, they both exploded.  Ka-Blam!  Ain’t never seen anything like it.  Wicked freaky.”

Sounds to me like the magic of the Holy Grail had an adverse reaction to the bite of the cursed undead.

As it turns out, the yard sale was actually more of an estate sale.  “A man accumulates a lot of things in 135 years,” Danny told me as he discussed the life of Joseph Arimathea.  “If I’d known that old cup was worth something, I would’ve asked for a heck of a lot more than 75 cents for it.”

Thankfully, The Holy Grail is in much more intelligent hands now.  I wonder if the new Pope will drink from it.  That would solve the problem of ever again having to hold another Conclave to pick a new Pope.

Just something to think about…

Native New Yorker who's fled to the quiet life in Maine. I write movies, root for the Yankees, and shovel lots of snow.
View all posts by Austin →
This entry was posted in Humor, Philosophy and tagged Eternal Life, Holy Grail, Humor, knights, Legend, Modern Philosopher, Sarcasm, satire. Bookmark the permalink.