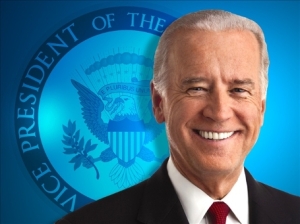 Joanie Cordova has been the Vice Principal at Brewer High School for fifteen years.  Next month, she’ll be heading to the White House for her fifteen minutes of fame!

She will be appearing in the first episode of ABC’s new summer reality series “Vice Swap”.  The show, which follows Vice President Joe Biden as he swaps jobs for one week with average Americans, picked Cordova after her recent speech about high school teachers being more important to this country’s success than politicians, went viral on Twitter, You Tube, and Facebook.

“I can’t believe this is happening,” a nervous Cordova told this Modern Philosopher when I sat down with her in her office at Brewer High.  “I meant everything I said in that speech, but I never thought it would be heard by anyone outside of this school, let alone outside of the state.  I’m really excited about the opportunity to meet the President, spend some time in the White House, and see what I can do about having more money allocated for education.”

The Vice President is excited as well, but for other reasons.  “I can’t wait to meet Stephen King,” Biden told me via Skype as the White House Press Secretary, several Secret Service Agents, and two ABC executives hovered very close by.  “I want to build a snowman, and I want to kill a Zombie, and I want to go for a ride in a UFO.  Plus, I hear the school teaches magic or something, so I’m hoping ABC can get Harry Potter to make a cameo.”

Actually, Joe, the school’s athletic teams are called the Witches, and only a very small percentage of those enrolled are actual witches.  “So that still means there’s a chance they’ll get Harry to come in and guest lecture or something, right?” Biden asked me enthusiastically.  “I am so excited to go to Maine!  When do we leave?”

Is Cordova at all worried that the Vice President will destroy her high school when he is set loose in its corridors?  “The producers assured me they would keep him on a very short leash,” she answered with a chuckle.  “Besides, he’s only going to be here for a week, so how much damage could the man possibly do?  Wait…don’t answer that.  I’m going to retract that statement so as not to tempt the Fates to teach me a lesson.”

Are the students excited that the Vice President is coming to Brewer?  “It’s hard to get a read on them,” Cordova confessed.  “They’re a great group of kids, but teenagers are so unpredictable.  When I explained to them that this man could very possibly be the next President of the United States, they nearly laughed me out of the auditorium.”

This Modern Philosopher is proud to hear that the students at his local high school are extremely knowledgeable about politics.  I look forward to reporting on all of Biden’s misadventures next month, so keep checking here for updates.

I just hope President Obama doesn’t get too attached to our Vice Principal, and is willing to give her back at the end of the week…