Leaning On My Better Calf

Dr. Jekyll stopped by The House on the Hill today and finally cleared this Modern Philosopher to run again.  It has been a very frustrating past few week since I injured my left calf.  I’d been continuing to run on it, but after the pain got so bad last Saturday, I finally sought out the good doctor for advice.

He told me to shut it down until he gave me the okay to resume.  In the meantime, I have been going to Physical Therapy every day with his associate, Mr. Hyde.  Hyde pushed me just enough so that I felt like I was still getting a decent burn, but he always stopped me before I could do anything to hamper my recovery.

I was genuinely surprised to find that I was getting antsy about being unable to run.  I have detailed many times on the pages of this blog just how much I hate the “R Word”.  However, I had gotten into a nice rhythm of running 4 miles, four times a week, and it pissed me off to not be able to get back out on the road and take advantage of the beautiful weather and my bizarre affection for an activity I’d always loathed.

Luckily, it rained like the Dickens (awesome literary reference, blogger boy!) last week, so I probably wouldn’t have wanted to test out my injured leg on the slippery roads.  I did fret a little about my cardio skills waning at a time when the Zombie population in Maine was becoming much more active.  Remember, when it comes to dealing with Zombies, it’s cardio, cardio, cardio!

Plus, I ate a lot of barbecue this weekend, and I needed to do something to burn off those calories.  Red hot dogs are evil…so much so that The Girl Who Fires Up My Grill emailed and begged me to please stop tweeting about them because it was making her crave them.

It was a gorgeous day today and I was determined to go for a run.  When I went to my PT appointment, I kept pestering Mr. Hyde to get Dr. Jekyll to stop by so I could ask him for medical clearance.  As luck would have it, Hyde could not track down his partner, but he did agree to stop by my house later in the day.

Once Dr. Jekyll cleared me, I did extra calf stretches and promised to only run 3 miles at a slower pace.  We figured that lopping off the last mile would decrease my chances of re-aggravating my injury by 25%.  Of course, I’m such a klutz that every step I take has the potential to land me in the hospital in a full body cast, but I didn’t remind the doc of that.

I was a man of my word and fought the urge to really test my leg by picking up the pace.  I completed the 3 miles without any aches, pains, or need for a stretcher.  I crossed paths with another runner along the route, and he held out his hand for a medium five as if he knew this was my first time back and I deserved a little recognition.

When I made it back to the driveway of The House on the Hill, I was swept up in the awesome sense of accomplishment I feel every time I return home alive from a run.  I’d forgotten how much I enjoyed that feeling. 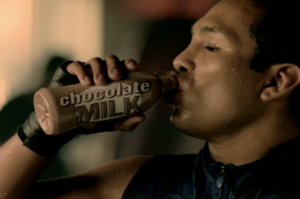 I rewarded myself with a big glass of chocolate milk and a long shower, but only after doing some serious stretching.  The plan is to take off tomorrow, see how the leg feels, and then try to do 3 miles again on Thursday if all is well.

Dr. Jekyll and Mr. Hyde, I know you read this blog, so I wanted to thank you both for helping me get back on the road again.  One of these nights, I’m going to get you guys to clear your schedules so I can take you out for a drink.

Now it’s time for some well-earned relaxation time in front of the TV watching the Yankees game.  Life is good, Modern Philosophers.  Hope you all feel the same…

Native New Yorker who's fled to the quiet life in Maine. I write movies, root for the Yankees, and shovel lots of snow.
View all posts by Austin →
This entry was posted in Fitness, Humor, Philosophy and tagged chocolate milk, exercise, ftiness, Humor, Modern Philosopher, running, satire. Bookmark the permalink.

28 Responses to Leaning On My Better Calf