What The Hell? The Devil Took My Last Snapple! 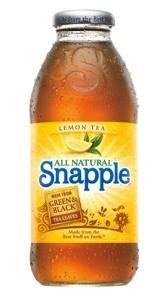 All I could think about all day, Modern Philosophers, was clocking out, going home to The House on the Hill, and unwinding on the porch with an ice cold Snapple.

So I wasn’t exactly thrilled when I found the last Snapple was gone from the fridge.  I’d share what I said upon making this discovery, but my curse-riddled tirade wouldn’t exactly go with this blog’s family friendly theme.

“You’re going to Hell if you keep swearing like that,” came an all too familiar voice from the living room.  Remember, this is a house I supposedly live in alone.

I grabbed a bottle of water and trudged to the front of the house to check on my guest, a term I use VERY loosely.  The Devil had his feet up on the table, the remote control in his hand, and an empty Snapple bottle next to him on the couch.

“You should think about getting HBO, bro,” he said without even looking up at me.  “I could probably arrange for a morally corrupt cable guy to come over and give it to you for free if money is the issue.”

I sat down next to him and sighed.  I’m worried that my home might soon be officially classified as a Ring of Hell due to his constant presence.

“Rough day, huh?” he guessed correctly once he had finally settled on a channel.  Seinfeld.  The guy at least knew his television.  “I know I took the last Snapple, and I can tell by the look on your face that you want to fight me, but I promise to make it up to you.”

The thing was, I could tell by his body language that something was bothering him.  So I put aside my anger and asked him why he hadn’t been around in awhile.

“When I’d rather hang out at my place, you know you’re having a scorcher of a Summer,” he replied with a devilish smile.  “How did you survive the past week without an air conditioner?  Do you know how many souls I collected last week from people who happily agreed to eternity in hellfire in exchange for an air conditioner?  People are getting stupider by the day, and it makes my job too easy.  I’m bored.”

Since he wasn’t volunteering anything, I just asked him what was wrong.  “Your blog post this morning bothered me,” he answered quickly and caught me by surprise.  “It got me to thinking that I’m a horns and pitchfork guy living in a harps and halos kind of world.  I’m kind of lonely.  Not many people are willing to hang out with me and watch the game.”

I reminded him that I was always happy to have him over for any sporting event.  “But I can see the tide is changing,” Lucifer accused with some sadness in his voice.  “I know you’ve been thinking about that gorgeous Archangel who visited you a few weeks ago.  Don’t tell me you wouldn’t much rather spend time with her than with me.”

Lying to the Devil is a losing proposition, so I didn’t even try.  He was right.  I had been burning the mental candle on both ends conjuring up thoughts about Rachel, the last Archangel God had sent to me with a message.  I’ve never seen a creature more beautiful, and doubt I ever will.  Can you tell someone hasn’t been on a date in forever?

I told him I could still be his friend despite my feelings for Rachel.  “You’re either an Angel guy or a Devil guy, dude,” he said somberly.  “It’s okay.  Seriously.  I’d pick the sexy brunette, too.”

I’d never seen the Devil like this.  Was he really upset because I was smitten for an Archangel?  He used to be one himself before that little falling out with The Big Guy.  Rachel was never around, so I didn’t get why this was even an issue.  She was far away, doing something way more important, and she probably didn’t have any time to think about some dorky guy in a toga back in Maine.

“I saw the way she looked at you, man,” Satan said with a sly grin.  I don’t know how he saw anything because he was not at The House on the Hill when Rachel visited.  “She might be far away, busier than you could ever imagine, be she’s thinking about you.  I can guarantee that, my friend.”

I was touched that he called me his friend, but I still didn’t understand why this was all bothering him so much.  “I can’t exactly stroll in here at will if there’s an Archangel on the premises,” he finally explained.  “We’re duty bound to inflict Tarantino kinda violence on each other should we ever cross paths.  I wouldn’t want to end up the victor over someone you love.  There’s no way I could do that after all the kindness you’ve shown me.”

The Nuns will be upset with me for sure, but I had to admit that I hugged it out with the Devil right then in the living room of The House on the Hill. 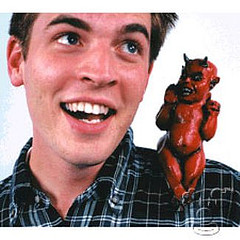 I gave him my word I’d never shut him out of my life, and assured him that should he and Rachel ever find themselves face to face under my roof, I’d declare it a Neutral Zone and not allow a battle of Biblical proportions to be fought.  Not while I still owed so much on the mortgage.

The Devil was clearly touched.  He snapped his fingers and two demons appeared, each weighed down by the cases of Snapple in their arms.

“You’re okay for a human,” he assured me as he’d clearly come to terms with the the fact that sometimes you just have to accept you’re a horns and pitchfork guy in a halos and harps kind of world…

Native New Yorker who's fled to the quiet life in Maine. I write movies, root for the Yankees, and shovel lots of snow.
View all posts by Austin →
This entry was posted in Humor, Love, Philosophy and tagged angel, Devil, friendship, heaven, hell, Humor, Modern Philosopher, Romance, satire, Snapple. Bookmark the permalink.

14 Responses to What The Hell? The Devil Took My Last Snapple!