Sad news in Maine today, Modern Philosophers.  Maine’s Little League Champions, a team made up of All Stars from District 9, have been disqualified from playing in the Little Little World Series due to a technicality.

“It has been brought to our attention that a majority of the players on the team from Maine are…ummm…not human,” Little League spokesman Ty Bridges told this Modern Philosopher.  “Some of the other teams protested, so we had to dig through the rulebook and there is a rule stating that all players must be human.”

I had no idea that Little League Baseball promoted discrimination!  “It’s not about discrimination,” Bridges tried to explain.  “The other teams think Maine has an unfair advantage seeing as how their team is…ummm…different.” 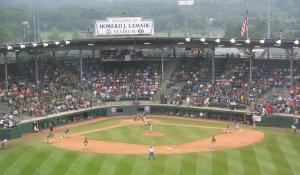 While it’s true that the players on the Maine team are mostly Aliens, Wizards, Vampires, and Ghosts, they are all residents of the state and they all fall within the age guidelines set up by Little League Baseball.  So don’t these players deserve a chance?

“It is not that I don’t think they deserve a chance, it’s just that the players on my team are scared to death to get on a field with them,” admitted the Coach of the Latin American team.  “We are raised to be very superstitious, and your players are the things that give my players nightmares.”

This Modern Philosopher had to respect that coach for coming forward and speaking about the cultural differences that might have played a part in this decision.  That doesn’t, however, make Maine’s District 9 Lumberjacks feel any better.

“Ever since we moved to Earth and I first saw a baseball game, I have dreamed of representing my new home in the Little League World Series,” Fl’ago-Tra, Maine’s star shortstop, team captain, and Alien told this Modern Philosopher.

“This is going to haunt me forever,” Thaddeus Dinsmore, The Lumberjack’s best pitcher told me as he wiped away his tears.  “I died even before baseball was invented, so I never thought I’d get a chance to play in the Little League World Series.  It’s like I’m dying of the whooping cough all over again.”

Yes, Modern Philosophers, even Ghosts cry when their dreams are crushed.

So while we still wish the best for all the teams playing for the title in Williamsport, PA, this month, you’ll have to forgive the people of Maine if they don’t watch the tournament.

The most accepting state in America can’t understand why the country’s pastime isn’t a little more accepting.  Isn’t baseball supposed to bring us all together and help us forget that everyone’s a little different???