Jump Start Your Brain: The Wicked Witch of the West

Good morning, Modern Philosophers!  I am awake too early this morning because I had to do something sweet for the person most important to me in this world, and now I can’t get back to sleep.

So, I thought I’d grab the laptop and see if I could jump start my brain by doing a little writing.  If you need a similar brain boost, keep reading.

Maybe it was all of last night’s rain, or maybe it’s the sound of The Flying Monkeys in the sky above The House on the Hill, but for whatever reason, my thoughts this morning have drifted to The Wicked Witch of the West.

More specifically, I’ve been obsessing over how the most powerful Witch in Oz was defeated by a bucket of water.  Why would water kill a Witch?  Did that mean that every time it rained in Oz, the Wicked Witch of the West had to hide inside her castle? 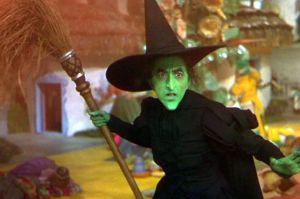 How come the Good Witches or the other residents of Oz didn’t see to it that it rained perpetually to keep themselves safe from her?  Why didn’t they all carry water pistols, hoses, or buckets of water to keep her away?

If she was such a powerful Witch, why didn’t she use Magic to protect her from water?  Couldn’t she have come up with an anti-water spell, or used Magic to turn water to ice before it hit her?

Does this mean that she never bathed, took a shower, or went swimming?

I will admit that I did some research on all these questions this morning.  According to Wikipedia, Baum’s books didn’t really explain the issue, either.

I want answers, Modern Philosophers!  Who’s got theories on these pressing matters?  I tried asking The Flying Monkeys, but they just kept circling overhead and refused to come down to talk to me.  Punks!

At least my brain is running at full speed after all these Deep Thoughts on The Wicked Witch of the West.  How is yours doing?

Native New Yorker who's fled to the quiet life in Maine. I write movies, root for the Yankees, and shovel lots of snow.
View all posts by Austin →
This entry was posted in Humor, Philosophy and tagged Flying monkeys, Humor, jump start, Magic, Modern Philosopher, movies, satire, The Wicked Witch of the West, The Wizard of Oz, water, witch. Bookmark the permalink.

21 Responses to Jump Start Your Brain: The Wicked Witch of the West