Three Chairs On A Porch: Two Slayers & A Guy In A Killer Toga 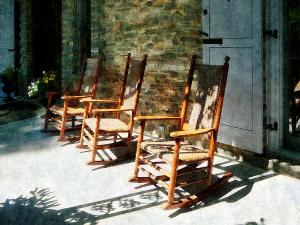 Since the feedback has been so overwhelmingly positive and because the weather is beautiful again tonight, I’m back with another edition of Maine’s favorite talk show, “Three Chairs on a Porch”.

For those of you just tuning in, the premise is simple: two famous folks, who are vaguely related, join me on the front porch of The House on the Hill.  They get to ask each other one question.  I sit between them, flash my charming smile, drink my Snapple, and eavesdrop on the conversation.

The interns really outdid themselves tonight, Modern Philosophers.  My guests are President Abraham Lincoln and Buffy Summers, two celebrities who certainly know their way around a Vampire’s corpse.

After quick hellos, Honest Abe sits to my right while Beautiful Buffy curls up on the chair to my left.  Knock ’em dead, guys!

“Mr. President,” the petite blond began in quite the deferential manner, “you certainly know how to handle an axe.  How would you use your weapon of choice to cut through the red tape currently strangling the government and holding up our current President’s healthcare reform plan? 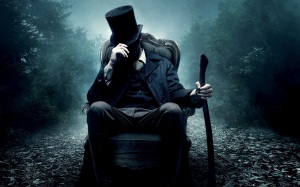 Lincoln smiled and stroked his beard as he pondered her question.  “First of all, please call me Abe,” he requested as his smile grew.  “It’s been far too long since I’ve sat in the White House, and you and I are kin in our other line of work.”

Buffy blushed slightly and smiled in return.  I toasted the mutual love by holding up my bottle of Snapple and then taking a very long sip.

“Every President, no matter how popular, faces opposition to his ideas…especially the more revolutionary ones,” Abe explained.  “That opposition will come from the party not in office, the media, the American people, and even from himself.  I’m sure President Obama is having doubts about this program as he gets slammed from all sides, but he will stand strong.  Like a great oak against a mighty hurricane, every President must take a pummeling and wait for the storm to pass.”

“You are correct in thinking that I would not stand idly by.  I would wield my axe, but it would be one of the sharply honed word variety.  I would engage, cajole, argue, and instigate.  I would shred that red tape, force a compromise, and slay the proverbial Vampire sucking our government dry.”

Buffy rose from her seat to applaud, so I did the same.  Abe tipped his famous hat and did his best to act like he didn’t wish he could get another four years in the Oval Office to put America back on the right track.

“I want to begin, Buffy, by saying that you are a hero and deserve to be recognized for your brave actions in defending California from a Vampire infestation.  I hope you will accept this token of my appreciation.”

Lincoln quickly got up, covered the distance between himself and my other guest in two long strides, and presented her with a small, silver replica of his famous axe.  “It’s not the Silver Star, but I felt it was even more appropriate.”

Buffy wiped the tears from her eyes and gave the man who freed the slaves the biggest hug her tiny body could muster.  Once she had composed herself and Abe had gone back to his seat, the interview continued.

“I don’t want to sound like a total fan boy, but how excited were you when Joss Whedon reinvented you for the television series?” Lincoln asked with excitement in his voice.  “I thought the movie was fun, but the TV show took the character, the idea, and the world of Buffy to an entirely more amazing dimension.”

“I was definitely stoked,” Buffy replied.  “While I was cool with my persona in the movie, I thought it was a little too campy  and that I could be more than just a hot cheerleader who knew how to kick some ass, you know?”

“Don’t get me wrong,” she continued.  “I got that the joke was in the conceit.  That Joss was turning the stereotype of the California cheerleader Barbie doll completely on its head, but I wanted to do more.”

“Luckily, Joss listened to me, made the show more serious and dark, gave me a chance to grow and add dimension, and allowed me to be a real role model for girls.  I don’t think I ever would’ve felt complete if he had just left me in movie limbo.  That goodness for TV, the Hellmouth and my Scoobies!”

Once the questions were out of the way, my guests began to exchange stories about their favorite Vampire conquests.  Luckily, there were no Vampires anywhere near The House on the Hill tonight.  I’d asked Waltzing Maltilda to cast a spell to make the surrounding area bloodsucker free for the evening.  While Maine’s Vamps are no threat to humans, old habits die hard, and I was worried that Buffy & Abe might want to get their slay on.

We ended up having a totally vegetarian menu at The House on the Hill…no stakes!

Thanks for joining me out on the porch again tonight.  I promise to invite you over again real soon…

13 Responses to Three Chairs On A Porch: Two Slayers & A Guy In A Killer Toga