Pope Francis today announced that he will be holding weekly spelling bees at The Vatican in the wake of the recent “Lesus Coin Fiasco”.

“Heavens, it was most embarrassing, Austin,” The Holy Father told this Modern Philosopher.  “That’s e-m-b-a-r-r-a-s-s-i-n-g, in case you were wondering.”

For those of you not up to date on your Papal news, The Vatican recently released a special gold coin to commemorate Pope Francis’ first year as the head of the Catholic Church.

It was a beautiful coin, but there was only one small problem… 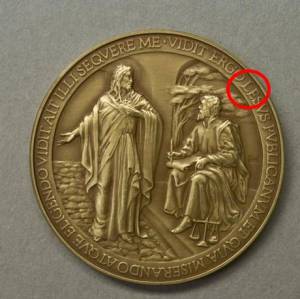 The Pontiff really does have a good sense of humor.  Knowing this, I asked if he intended to take part in the weekly Spelling Bees.

“That really wouldn’t be fair, now would it, Austin?” he asked with a look of mischief on his always smiling face.  “You’re Catholic, you went to Catholic School, so I know the Nuns taught you that the Pope is infallible.  It would be impossible for me to make a mistake and lose, so I think I’ll decline to participate and give someone else a chance.”

What does the winner of the weekly spell-a-thon get?  “I haven’t figured that out yet, but I know for sure it won’t be a Lesus coin,” Pope Francis quipped.

The Pope will be appearing all week at The Vatican’s Yuck Yuck Lounge.  Make sure to catch his stand up act…