Running Through The Forest Of My Mind 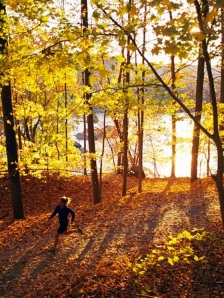 It’s an unexpectedly gorgeous Autumn day in Maine, Modern Philosophers, so there was no way I was going to pass up on a chance to go for a run.

If I can wear shorts in October and not get frostbite, then I take that as a sign from the Fitness Gods that my place is out on the road working up a sweat.

As I mentioned in yesterday’s running post, I have a tendency to get wrapped up in my thoughts when I’m dashing through the streets in my running toga.  Most of the time, that’s a wonderful thing that allows me to drift off into a steady pace and make it home before I realize I’m even forcing myself to sweat.

Some days, though, I’d much rather the thoughts that rattled around in my brain simply muted themselves and allowed me some peace and quiet.  After yesterday’s Deep Thoughts on my wedding anniversary, I wanted today’s run to be mentally stress free.

Like I said, it’s a gorgeous day.  There’s a slight wind, but that’s always a help, especially when it’s at my back (as long as my running toga doesn’t billow too much in it).  Since it’s fall, today’s winds caused it to rain leaves down on me as I passed beneath the trees that lined my route.

Even though I was running on the blacktop of Eastern Avenue, I heard the crunch of Autumn leaves beneath my feet.  It made me think I was running through the woods.  That was such a pleasant concept that I allowed my thoughts to drift off to the Forest Of My Mind, which is such a beautiful, peaceful, and comforting place.  I wish I could give you all a tour, but thus far, only John Malkovich has ever been able to figure out how to gain access.

Believe me, the forest is an amazing place to run.  The fall foliage is breathtaking.  There isn’t anyone else around.  There’s certainly no traffic, and the weather is always perfect.

Of course, with it being located inside the mind of this Modern Philosopher, an occasional roadblock was bound to appear.  Despite the peace and quiet, I still ran into random thoughts on work, my love life, the finances, and other annoying personal issues.

You know what I did any time one of those things crossed my path?  I just veered off that route and took off deeper into the woods in another direction.  Soon enough, my mind was clear again except for the calming sound of leaves crunching beneath my sneakers. 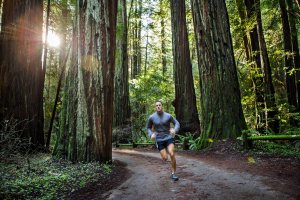 Before long, I saw The House on the Hill in the distance.  I had survived another run.  I added a little more distance to yesterday’s run, and still managed to knock 25 seconds off of my time.

Obviously, I’m able to run faster when I’m not weighed down by troubling thoughts.

I hope you’re all having a relaxing Sunday, and maybe setting aside a little time to go for a run or just a stroll through the forest of your mind.  I highly recommend it…

11 Responses to Running Through The Forest Of My Mind