Dragon Fire Outlawed As Means Of Clearing Snow In Maine 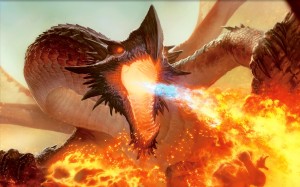 Maine Governor Paul LePage today pushed through a new law making it illegal for Mainers to use Dragon Fire to clear snow and ice.

“While the Governor knows that using Dragons is a cheaper, less physically demanding means of clearing away snow, it is also extremely dangerous,” LePage spokesperson Jackie Draper explained to this Modern Philosopher.  “There have been too many fires resulting from the use of Dragons, so Governor LePage felt this was the best way to go.”

Reaction from Mainers has been mixed.  While many resent LePage’s decision, there are those who actually agree with the embattled Governor for once.

“I think LePage is a dolt,” Teddy Dechamps of Milford told me.  “But for once, I agree with him.  Dragon Fire, likes Dragons, is nearly impossible to harness.  I’ve seen an entire block of houses wiped out because a Dragon with a really good set of lungs had horrible aim.”

Those Mainers who don’t agree with LePage’s decision vowed to continue using their Dragons.  “What’s LePage gonna do?” asked Billy Ray Tobbins of Jackman.  “Is he really gonna come all the way up here and arrest me?  His fancy limousine won’t make it through the snow.  Unless we use Dragon Fire to clear the road.  Come get me, Fat Boy, and talk to my Dragon!”

I do love how Mainers aren’t shy about expressing their Deep Thoughts.  I plan to follow this story, and am curious to see what Governor LePage does to enforce the law.

What do you think, Modern Philosophers?  Do you agree with the new law?  If you lived in Maine, would you want to give up your right to use Dragon Fire?  Do you think that Dragon Fire use should be protected by the Constitution?

Native New Yorker who's fled to the quiet life in Maine. I write movies, root for the Yankees, and shovel lots of snow.
View all posts by Austin →
This entry was posted in Humor, Philosophy and tagged dragon fire, Dragons, Governor LePage, Humor, laws, Maine, Modern Philosopher, Sarcasm, satire, snow. Bookmark the permalink.