The cast for the seventh Star Wars film has been announced, and while that news has sent waves of excitement rocketing through this galaxy, as well as another one far, far, away, there is also a powerful disturbance in The Force.

Even though the Empire might very well strike back, and it’s clear that the Jedi are returning, there is one Dark Lord of the Sith who is very unhappy.

He also happens to be pacing angrily back and forth across the front porch of The House on the Hill.  “How can they make a new Star Wars film and not have Darth Vader?” Darth Vader demanded of this Modern Philosopher, who remained quiet and said a silent prayer that his throat would not be crushed by the unseen hand of The Force.

“They’re bringing back my children, the droid I built as a boy…” his voice trailed off as he finally stopped pacing.  “Rumor has it my grandchildren will be in the film…”

The expression on Vader’s frightening black mask never changes, Modern Philosophers, but my gut told me the old tough guy was crying underneath it.

“I understand that I died at the end of Return of the Jedi,” he pointed out as his voice regained its power and his boots once again started across my floorboards.  “However, Ben and Yoda kept returning after their deaths.  Heck, Ghost Anakin even got in a cameo at the end of Jedi.  So why are they shutting me out of the new flick?” 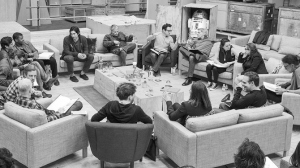 He turned his intimidating glare onto me, and I cowered in my chair and attempted to disappear inside of my toga.  It did not work, though.  I was still there, unarmed, and not at all gifted in the ways of the Jedi, forced to stare down the scariest dude I had ever met.

I volunteered that maybe the producers couldn’t come up with a feasible way to bring him back to life and work him into the story.

Vader laughed so hard that my chair vibrated.  “We’re talking about a galaxy that has space travel, hyperdrives, lasers, Death Stars, lightsabers, and droids.  You want me to believe they don’t have the technology to reanimate me?  I’m pretty much all machine at this point anyway…just buy some new parts!”

I opened my mouth to say something, but my brain was simply too frightened to be able to form even the shallowest of thoughts.

“Let me remind you that the Empire has perfected cloning,” he pointed out as his hand stroked the hilt of his lightsaber menacingly.  “We fought an entire Clone War!  Do you mean to tell me that no one ever had the thought to clone the Emperor’s right hand man?  That there isn’t a warehouse full of Darth Vaders out there, just waiting to be called to duty?  Ha!  This is Death Discrimination for sure!”

I’d never heard of Death Discrimination, but I’d rather dive into a Sarlacc pit before I told Vader that he might be making up a legal term.   I just nodded instead. 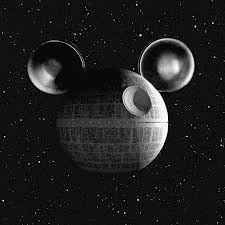 “Disney will be hearing from my attorneys,” he assured me as he strode confidently to the end of my porch and stared up at the setting sun.  “That Evil Mouse Empire does not want to take a walk on the Dark Side with me, I assure you, Austin!”

I nodded my emphatic agreement with that statement and took a long sip of my Snapple.  That major disturbance in The Force had moved to my belly, and I really hoped Vader would calm down soon…

10 Responses to Darth Vader To Sue Disney For “Death Discrimination”