God Electrifies The Pearly Gates To Keep Out Zombies 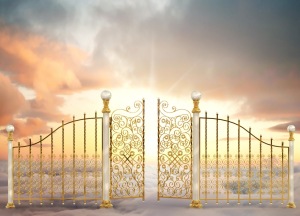 Apparently, Zombies don’t get to go to Heaven, Modern Philosophers.

The Vatican announced today that God had electrified the Pearly Gates in order to keep out the herds of Zombies that keep knock, knock, knocking on Heaven’s Door.

“I’m told they’ve had quite the influx of uninvited Zombie guests lately,” Pope Francis informed me with a chuckle.  “St. Peter got so freaked out by it that he abandoned his post at the Pearly Gates and demanded that something be done about the problem immediately if anyone ever expected him to return to work.”

How did the Zombies even get that close to Paradise?  I can’t picture them trudging up the Stairway to Heaven.

“Zombies were once humans with souls, Austin,” the Holy Father reminded me.  “A multitude of those souls had a place waiting for them in the Kingdom of Heaven.  Due to a computer glitch, when the Zombies were finally put out of their misery, any Walker who had been destined for Heaven as a human was called up to the Pearly Gates.”

I would not want to work in Heaven’s IT Department right now!  I have to say it…things must be Hell for those guys.

According to my sources in Eternal Paradise, God first tried posting signs advising Zombies to keep out and that they were not welcome beyond the Pearly Gates.

“Someone forgot that Zombies can’t read,” quipped an Angel who wished to remain anonymous.

Once it became apparent that the signs weren’t going to stop the undead from trudging up to the Pearly Gates and slamming against them while drooling, moaning, and reaching for souls on the other side, an Army of Angels was sent to deal with the problem.

“There have been great battles just outside the Gates of Heaven,” my anonymous Angelic source continued.  “The Archangels led the charge, dispatching the Zombies with their mighty flaming swords.  It reminded me of The Dark Time, when Lucifer fell.”

We paused for a moment of silence to remember that horrible period in Heaven’s history.

Angels bringing down Heaven’s wrath on beings that had already died twice wasn’t exactly good for business, though.

“Too much mess,” Pope Francis explained.  “The Angels had thinned the herd enough to make them much less of a nuisance, and IT reported that they had the computer glitch almost under control.  That’s when God decided to electrify the Pearly Gates and free up the Angels for more important duties.”

Heaven’s Facilities Department estimates that “The Foyer”, which is how Heaven’s residents refer to the cloudy, open area where souls wait to gain entry to Paradise, to be Zombie free by June 1.

“I think we got this thing under control now with the fence,” advised St. Vito, Head of Heavenly Facilities.  “I don’t know who’s gonna clean up this mess, but it ain’t gonna be me.  Maybe we can get some souls from Purgatory up here to take care of it.”

I ask you to keep me in your prayers tonight, Modern Philosophers, because I fear the Nuns are on their way to The House on the Hill to discipline me for writing this post…

Native New Yorker who's fled to the quiet life in Maine. I write movies, root for the Yankees, and shovel lots of snow.
View all posts by Austin →
This entry was posted in Humor, Philosophy and tagged heaven, Humor, Modern Philosopher, Pope Francis, Religion, Sarcasm, satire, Zombies. Bookmark the permalink.