And He Will Raise You Up On Gargoyle’s Wings 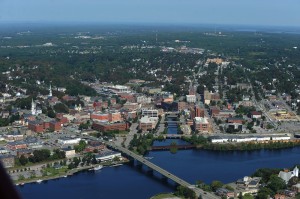 Have you ever had this overwhelming urge to fly, Modern Philosophers?  A desire to no longer have to play by gravity’s rules?  An inkling that filled your head in the afternoon, and simply wouldn’t leave?

That was my story today at work, and I could not wait to get home to The House on the Hill to do something about it.

Gary obviously heard me charging up the stairs to the attic, because when I climbed out of the window and onto the roof, my loyal Gargoyle was waiting to greet me.

“I thought I might see you today,” he told me with a knowing smile.

We wandered over to Gary’s usual perch at the front of the roof.  He hopped up onto it, and spread his mighty wings so that they shielded me from the sun, which was still very powerful at 6:00.

Gary, who aside from being my self-appointed bodyguard and guardian of The House on the Hill was one of my closest friends, could tell by the look in my eyes exactly what I had in mind for this gorgeous June afternoon.

“You want to fly, don’t you?”  It was really a rhetorical question, but he posed it as a means of nudging me out of my daydream.  The sky was beckoning, and I was mesmerized.

I climbed on Gary’s back and we soared high above my street.  We circled the block a few times to allow me to get acclimated.  No matter how many times you go for a Gargoyle ride, you still have that moment of confusion as you body adjusts to the contradiction of it being high up in the sky.

I asked Gary to take us down to the river, and he was happy to comply.  Despite my fear of water, I had absolutely no problem gliding several hundred feet over it.  There was no way that Gary, my protector, would ever let anything happen to me.  And I was simply at peace.

High above Bangor, there was no stress.  No job.  No bills.  No worries.  No broken heart.  No lonely boy sitting on a couch wondering where it had all gone wrong.

In the sky, there was nothing but a refreshing breeze, absolute freedom, and the comforting flapping of Gargoyle wings.  Life was absolutely perfect.

Gary followed the river for a while.  Maine is breathtaking from ground level, but when seen from above, it is picture perfect.  So much green.  So little traffic.  Very few buildings reaching up trying to touch the clouds.  No smog.  Just lots of blue and green.

“What’s that song you’re humming?” Gary asked and caught me totally off guard.  I was so lost in my own little world, that I hadn’t even noticed that I’d been humming.  It took me a moment of listening to myself to identify the song.

I told him it was “On Eagle’s Wings”, something we used to sing in Church.  I then had this very vivid memory of my Dad belting out the song at Mass one Sunday.  My Dad sure did like to sing.

“It was one of Dad’s favorites,” I explained to Gary.

Gary understood that it’s difficult for me to talk about my Dad, so he didn’t push me to continue the conversation.  He just allowed me to enjoy my time high above the madness, thinking about my dear old Dad, and humming that song that he used to sing so well.

It was the perfect way to end a long day.  Sometimes, you just have to take the term “Rise above it all” quite literally…

Native New Yorker who's fled to the quiet life in Maine. I write movies, root for the Yankees, and shovel lots of snow.
View all posts by Austin →
This entry was posted in Humor, Love, Philosophy and tagged Dad, escape, flying, gargoyle, Humor, memories, Modern Philosopher, satire. Bookmark the permalink.