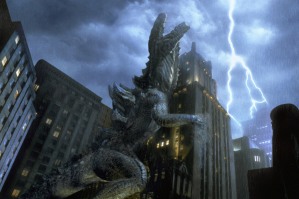 Godzilla started his Summer Vacation by emerging from the Atlantic Ocean off the Maine coast and heading directly to Bangor.  The giant monster and star of dozens of movies around the world, arrived downtown without incident accompanied only by his publicist, personal assistant, and trainer.

“Godzilla tries to keep a low profile when he vacations,” longtime publicist Ishiro Honda explained to this Modern Philosopher.  “He’s taking time off between projects, and when he does that, he just likes to blend in and be like anyone else.  He’s actually quite shy and hates all the attention that goes along with being a celebrity.”

This Modern Philosopher had to know why one of the most recognizable movie stars in the world would pick Maine for his Summer Vacation.  “He’s hoping to meet Stephen King,” Honda explained with a smile.  “Godzilla is also a huge fan of lighthouses, lobsters, and whoopie pies.  Plus, he likes that Mainers have welcomed Otherworldly Beings with open arms.  He really just wants to blend for a couple of weeks.” 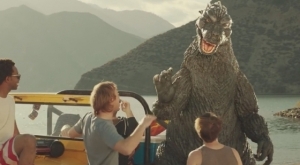 Even though Godzilla’s plan was to chill out and avoid the spotlight, he did pose for photos with excited Mainers (like the one on the left), signed plenty of autographs, and even let out a few window rattling roars after much urging.

Honda tried to keep his boss’ plans vague so as to allow him some privacy, but he did let slip that Godzilla planned to have a lobster feast tonight at a local restaurant.  So be ready to take a few photos, Modern Philosophers, if you’re in downtown Bangor tonight.

When word of Godzilla’s calmly slipping into Bangor for some rest and relaxation hit the news, officials in The Big Apple and Tokyo had a totally unexpected reaction.

“You gotta be kidding me!” New York Mayor Bill de Blasio told reporters.  “Godzilla tears through New York doing millions of dollars of damage, but just strolls into downtown Bangor without even knocking a friggin’ flower pot off a windowsill?  That’s bogus!” 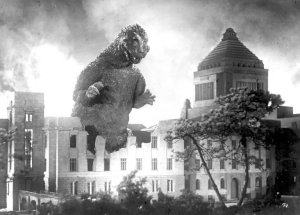 A representative for the Governor of Tokyo issued this curious statement: “The people of Tokyo are pained by the fact that Godzilla  chose to vacation in Maine rather than in Tokyo, a city he ravaged time and time again.  Despite the destruction he caused, the people of Tokyo have always held a special place in their hearts for Godzilla.”

When I asked Godzilla’s publicist about the comments from New York and Tokyo, he merely chuckled.  “Been there, done that,” Honda informed me.  “Godzilla needed a change of scenery.  Plus, I believe that his anger management therapy is really working this time.”

Honda told me that Godzilla might extend his stay through Labor Day if his time in Maine goes as smoothly as his arrival.  “And as long as the dome does not come down.  Godzilla does not do confined spaces!”  The odd little man laughed at his own comment, and then asked me where he could purchase a Godzilla sized toga.  It looks like we might have a new, super sized Modern Philosopher in our ranks!

Native New Yorker who's fled to the quiet life in Maine. I write movies, root for the Yankees, and shovel lots of snow.
View all posts by Austin →
This entry was posted in Humor, Philosophy and tagged Godzilla, Humor, Maine, Modern Philosopher, NYC, Sarcasm, satire, summer vacation, Tokyo. Bookmark the permalink.

7 Responses to Godzilla Visits Bangor Without Incident; New York And Tokyo Are Pissed