Life At The Cat House On The Hill

It’s been just over a week since I adopted Cali and Luna from the Bangor Humane Society, and brought them home to live at The House on the Hill.

Already, it seems like I’ll need to change the name of the property to The Cat House on the Hill.

Yes, Modern Philosophers, the kitties are settling in, and seem to have decided that I can remain here to feed them, provide toys, rub their tummies, and pet their heads.

After a few days of not venturing too far from their sanctuary under my bed, both little monsters are very comfortable making use of the entire house.

Luna has pretty much declared the love seat to be her private throne.  She’ll spend most of the day sprawled out there, and when the mood hits, she will allow me to approach and pet her.

As you can see, her teddy bear is allowed to sit up there with her, but Cali and I need to ask permission first.

Luna has proven to be a finicky eater.  She will silently follow me around in the morning until I put out her wet food.  She refuses to eat it when I first set it down for her, but then she eventually licks the plate clean.  I just think she likes her privacy, and prefers to eat when I’m not looking.

Cali, who was definitely the shyer one, took longer to come out from under the bed.  She has been making up for lost time, though.  After some exploration earlier in the week that had me thinking I’d lost her, she now runs around the house at top speeds while chasing down the catnip toys that always seem to be trying to escape from her.

Cali has also decided that I should never try to sleep without her cuddled up next to me.  I tried to take a nap on the couch this afternoon, and she fussed and fidgeted as she tried to find the perfect position to wedge herself in next to me.  She comes up on the bed with me at night, too. 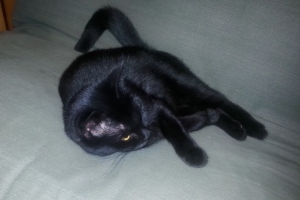 The new little black cat has proven to be a lap kitty as well.  Her favorite time to sit in my lap is when the laptop is already there.

She’ll just plop down in the tiny space between the computer and my tummy.  I’ve had to learn to balance the laptop on my knees if I want to get any writing done.

Both kitties are obsessed with my study.  The room is closed off because it’s poorly insulated.  I don’t really use it much anymore now that I have the laptop and don’t need the old computer that’s in there.  I didn’t want the cats to get used to going in there since it’s way too cold in the Winter, and I have the heat vent closed to try to save money.

However, Luna followed me into the room one morning, and now they both sit outside the door waiting for reentry.  There’s only a computer desk and a chair in there, so they sprint from wall to wall, sit in the windows, and act like it’s the coolest room in the house.

I don’t understand why they like the room so much, but they run around like a couple of kids set loose at a playground.

It’s been really nice having the week off to help them adjust to their new home.  I know that I picked the perfect kitties for me, and I hope that they think I’m okay, too…

Native New Yorker who's fled to the quiet life in Maine. I write movies, root for the Yankees, and shovel lots of snow.
View all posts by Austin →
This entry was posted in Humor, Philosophy and tagged Bangor Humane Society, Cali, cats, Humor, Luna, Modern Philosopher, Pets, Sarcasm, satire. Bookmark the permalink.

17 Responses to Life At The Cat House On The Hill