Bangor Police and Fire Departments are investigating a bank robbery at the Chase Bank on Colorado St that resulted in the building being burned to the ground.

Bank officials have not yet disclosed how much money was taken in the heist, but this Modern Philosopher has been told that it was in the six figures.

“They burned right through the vault door like it was made of wood,” Captain Anson Southard of the Bangor Fire Department told this Modern Philosopher.  “I’ve never seen a torch that can burn so hot so fast, so this is entirely new territory for us.”

Bangor PD has received conflicting stories from witnesses as to the appearance of the bank robbers.  “They agree that it was a crew of four, that was well trained, highly professional, and had done this before,” Office Mike Wentworth explained.  “The witnesses also agreed that the suspects were wearing masks of former U.S. Presidents.  After that, it gets a little… confusing.”

According to witness reports, the bank robbers were either white males or dragons.

“The witnesses are about 60/40 leaning towards the crew being composed of white males, average build, speaking with a slight surfer’s accent,” Officer Wentworth told me.

“The forty percent that claim the bank was robbed by dragons are very adamant about what they saw,” he continued.  “They claim the bank robbers were about eight feet tall, scaly and green, with enormous wings, and the ability to breathe fire.  They also growled a lot, and flew around the bank at amazing speeds.”

“Hmmm,” Captain Southard pondered when I told him about the dragon theory.  “Dragon fire would certainly be hot enough to burn extremely quickly through a thick vault door.  It would also explain why the bank was burned to the ground.”

According to the Police, there is no video footage to watch that would allow them to catch a glimpse of the robbers.  “The video cameras, the computers, everything inside the bank is gone,” Wentworth pointed out as he nodded towards the smoldering remains of what had once been the busiest bank in Bangor.  “We’re just lucky that everyone got out alive.”

Wentworth and his colleagues acknowledged that multiple reports of giant birds flying away from the vicinity also seem to support the theory that the bank job was pulled by a team of organized dragons with an affection for old Patrick Swayze flicks. 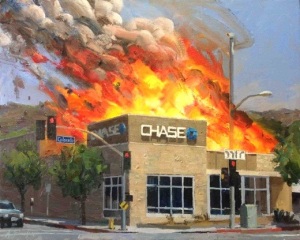 “We’re not ruling out anything at this point,” the officer told me with a determined look in his eye.  “I will tell you, though, that we are going to catch this crew.”

Chase is offering a reward for information that leads to the arrest of the bank robbers.   You can call 800-GET-THEM, or stop by any Chase branch that’s still standing to pass along any info.

Native New Yorker who's fled to the quiet life in Maine. I write movies, root for the Yankees, and shovel lots of snow.
View all posts by Austin →
This entry was posted in Humor, Philosophy and tagged bank robbery, crime, Dragons, fire, Humor, Modern Philosopher, Point Break, Sarcasm, satire. Bookmark the permalink.

8 Responses to Dragons Sought For Questioning In Bangor Bank Heist