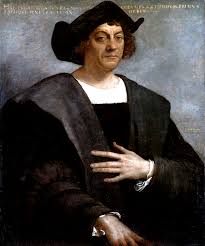 What a Columbus Day it has turned out to be in Maine, Modern Philosophers!

One of the floats got lost on its way to join Bangor’s Columbus Day Parade, and ended up making history when it discovered a brand new route to Canada.

Much like Christopher Columbus himself, the float’s operators had absolutely no sense of direction, but somehow ended up making a discovery that will be celebrated for centuries!

“I’m not really sure what went wrong,” Ernesto Pagnini, the float’s chief operator, admitted to this Modern Philosopher.  “The crew and I had charted out the route to the parade meticulously, we had maps, there was a GPS, and one of the folks riding on the float was from Bangor, so there was no way in the world we should have gotten lost.  I’m embarrassed, but I guess it all worked out in the end.”

Canadian Border Patrol Officials were not so sure that the float’s surprise arrival at a normally unmanned checkpoint was such a good thing.  Royal Canadian Mounted Police galloped to the area as quickly as possible to assess the threat.

“The Canadian Government is a huge fan of parades, Columbus Day, and visits from our dear friends south of the border in the United States,” read an official statement from the Prime Minister’s office.  “However, we get a little nervous when a float loaded with Americans tries to enter our country without warning or proper documentation. How about a little head’s up next time, eh?”

The Canadian Government did have to admit, though, that it was impressed with the time the float made on the newly discovered route.  The Prime Minister promised to look into reopening that border point and talk to President Obama about better paving the road used by the wayward parade folks.

President Obama could not be reached for comment, however.  It’s Columbus Day, so he was out of the office, taking yet another vacation day.

What happened to the people on the lost Columbus Day Float?

“We had a great day in Canada,” Pagnini told me as he showed me photos from his day north of the border.  “We ate a lot of Canadian bacon, played some hockey, visited Tim Horton’s, and got to ride on the Mounties’ horses.”

Pagnini said it was one of the best Columbus Days he’s ever had.  And to think, it all happened because he got lost.  How fitting…

Native New Yorker who's fled to the quiet life in Maine. I write movies, root for the Yankees, and shovel lots of snow.
View all posts by Austin →
This entry was posted in Holidays, Humor, Philosophy and tagged Christopher Columbus, Columbus Day, float, Humor, lost, Modern Philosopher, parade, Sarcasm, satire. Bookmark the permalink.