Since I was off, Modern Philosophers, I thought I would go up on the roof of The House on the Hill.  It had been too long since I’d spent any quality time with my loyal Gargoyle.

I have difficulty sleeping, even more so now that the other side of the bed has been empty.  The only thing that helps me to finally drift off into much needed slumber, is the knowledge that Gary is stationed on his perch and watching over me.

Gary the Gargoyle is more than just The House on the Hill’s unbeatable security system, though, Modern Philosophers.  He is my friend, my shrink, and my confidant.

Because of his keen sense of hearing, Gary knew about my arrival long before I had climbed out of the attic window.

“I was hoping you would come to see me today,” Gary revealed without moving from his usual position at the edge of the roof.

I slowly made my way out towards him.  It had been raining all morning, and the roof was much more slippery than usual.

“You could tell I had the day off?” I asked in a feeble attempt to make small talk as I navigated the steep roof.  I wasn’t that scared of falling because I knew there was no way Gary would allow me to plummet to my death.  But still, there was nothing to be gained from poking my nose up at the Fates.

“Even without my exceptional hearing, it would be difficult to miss all the noise you make plodding around inside the house,” he teased as not even a trace of a smile crossed his usual stone face.  “Does it feel less lonely down there if you make it sound like there’s an entire army living within the walls?” 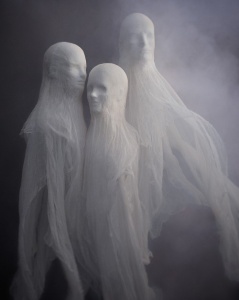 “You have to remember, I’m never alone here.  This house is full of Ghosts.”  I answered his quip with a witty line of my own.

“I’m sorry to be so blunt, Austin, but that’s part of being born with a heart of stone,” Gary explained.  “I think I much prefer that to the extremely fragile heart humans have.”

I sat down on the edge of the roof to the right of Gary’s perch.  The rain had stopped, but there was a light fog.  It made for an eerie view of my neighborhood.

“I take it you’ve heard me spending my nights trying to piece my heart together again?”

Gary simply nodded.  He was an excellent listener, and always gave me the opportunity to babble on.  Today, however, I did not feel like talking about this particular subject.

“From my limited contact with humans,” Gary finally began once he was sure I had nothing more to say, “I’m beginning to think that they see love to be more about pain than pleasure.  Much like that 50 Shades of Grey book so many women in this neighborhood have been reading.  I can hear them talking about it, and it makes me wish that I had horrible hearing.”

I had to chuckle at Gary’s very dry sense of humor.

“Why is it that humans are willing to subject themselves to so much pain just for a little bit of love?” Gary asked as he turned on his perch to face me.  “The ratio of pain and hurt to love and happiness seems entirely disproportionate to be at all acceptable.” 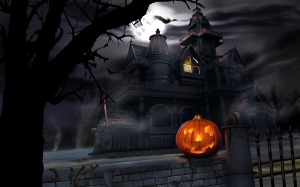 “You know what, Gary?” I finally replied after taking a moment to form some Deep Thoughts on the topic.  “I have no idea.  Love is like a Haunted House.  We know horrible, frightening things await, but we still go inside time and time again because we crave the thrill of the unexpected.  We have to know what’s waiting inside.”

Gary released a long, heavy sigh that I took to mean he was dissatisfied with my reply.

“Humans are very strange creatures,” he finally muttered.  “Now I understand why we have been sent to watch over you.”

At that moment, the skies opened, and the rain returned.  It was a pounding rain that would have left me soaked to the skin and in danger of sliding off the roof had Gary not immediately opened his wings to shield me from the deluge.

Native New Yorker who's fled to the quiet life in Maine. I write movies, root for the Yankees, and shovel lots of snow.
View all posts by Austin →
This entry was posted in Humor, Love, Philosophy and tagged Broken Heart, gargoyle, Halloween, Humor, Love, Modern Philosopher, on the roof, Sarcasm, satire. Bookmark the permalink.

10 Responses to 50 Shades Of Gargoyle