The First Snow: An Angry Blogger And His Roof Rake

It’s November 2, and yet it’s snowing like it’s the middle of February, Modern Philosophers!

Clearly, something happened during the Time Traveling portion of the evening when we set back the clocks and relived the hour between 1AM and 2AM.  My theory is that there is a tear in the space/time continuum, but I cannot verify this until I can talk to Doc Brown, who is currently off somewhere and sometime in the DeLorean.

For all the joy that Time Travel brings, it’s moments like this that cause our government to keep it so highly regulated.

I know not all of you share my hatred of snow, so I thought you’d enjoy some photos I took while trying to clear the driveway and roof of The House on the Hill.

That first photo is of my neighbors’ house, taken when I had finally shoveled my way down to the street.  It was a heavy snow, and it was falling hard when I took this photo.  In fact, I had no idea what the camera was seeing as I couldn’t see through the lens.  I just pointed it at the house and hoped I got a decent shot. 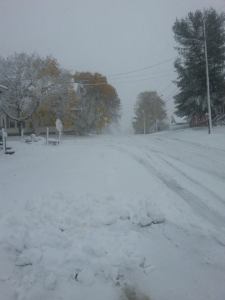 This next photo is the view up the street from The House on the Hill.  The town snow plow had not made it down my street yet, so cars were struggling to make it up the hill.

One driver simply gave up, turned around in my neighbors’ driveway, and went back down the street.  The others simply kept flooring the accelerator until their vehicles finally jumped forward.

I was at the ready, though, prepared to offer a push.  I don’t like driving in the snow, so I definitely wouldn’t turn my back on a driver in need.

The plow has been down the street at this point, so I haven’t heard any other cars spinning their wheels outside in the storm.

Of course, the arrival of the town plow means that the end of my driveway is now buried in snow again.  I’m far too tired to deal with it, though.  It’s supposed to snow all day, so I’ll head back out tonight and clear away what Snow Miser and the plow guy have left for me.

This is a view down the street from The House on the Hill, looking towards Bangor.

None of my neighbors had been out yet, choosing to let the snow keep falling so they could just deal with it all at once.

I’d rather not break my back trying to shoveling that much heavy snow.  Also, I’m paranoid about the roof over the downstairs bathroom since it leaked last year after several blizzards.

This Modern Philosophers formed some Deep Thoughts on the issue, and concluded that it made sense to clear the heavy snow off the roof now before it could cause any problem.

The only trouble with that amazing plan was that I could not find my neighbors’ roof rake.  They always leave it behind the house so I can use it, but it was not there.  I assumed it was in their utility shed, but that was locked, and they were not home.

Luckily, advances in modern technology allowed me to text Mark to inquire about the roof rake’s location.  About ten minutes later, he appeared, unlocked his shed, and handed over the prized tool of the champion snow clearer.

Have you ever used a roof rake, Modern Philosophers?  It’s pretty damn awesome.  There’s about twenty feet of piping with a rake on the end.  I trudged around to the back of the house, and put that bad boy to work on the roof over the bathroom.  I also cleared the little roof outside my bedroom, the front roof, and the roof over the kitchen.

Finally, I got all creative and used the roof rake to shake the snow off the lower branches of the tree over my garage.  They were being weighed down and leaning on the roof.  I figured that could not be a good thing, so I freed the limbs of that unwanted weight.

By the time I was done, my arms were aching.  Snow had accumulated in the driveway again, so I did one more pass with the shovel, and called it a morning.

As you can see from this final photo, I was not at all happy, Modern Philosophers.  It was just Halloween, and Winter is a good 7 weeks away.  Why the hell are we getting this much snow?

I blame both Snow Miser and that tear in the space/time continuum.  Hopefully, Doc and I can repair the latter, but what to do about the former?

When I finally got back inside, I was soaked to the bone.  I peeled off my wet clothes, took a hot shower, and made a big bowl of soup.

Of course, it’s still snowing, which means I’m going to have to go back out there again at some point.  Right now, though, I’m just going to relax, avoid looking out the windows, and get some writing done.

How’s the weather out your way, Modern Philosophers?

Native New Yorker who's fled to the quiet life in Maine. I write movies, root for the Yankees, and shovel lots of snow.
View all posts by Austin →
This entry was posted in Humor, Philosophy and tagged first snow, Humor, Modern Philosopher, photography, Sarcasm, satire, shoveling, snow, Time Travel. Bookmark the permalink.

26 Responses to The First Snow: An Angry Blogger And His Roof Rake