Kids Campaign To Have Thanksgiving Upgraded To A Gift Giving Holiday 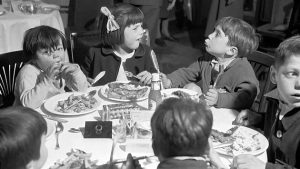 Apparently, American children have been saving up their allowances, Modern Philosophers, because those who occupy the kiddie table on Thanksgiving have just hired a powerful D.C. lobby group to campaign on their behalf.

Dylan Chatsworth, of the Beltway’s Havisham Group, spoke to this Modern Philosopher about his latest assignment.  “My job is to represent the children of the United States of America in their quest to have the Calendar Commission upgrade Thanksgiving to “Gift Giving” Holiday status.”

Doesn’t he really mean gift getting?  “Sure,” Chatsworth agreed with a winning smile, “but it’s a lobbyist’s job to put the proper spin on an idea to make it sound more appealing.”

Don’t children understand that the whole point of Thanksgiving it to focus on those things for which we’re thankful?  “Of course.  What my clients need for the adults of this country to understand, though, is that Thanksgiving is an extremely stressful day for kiddos, and all they are asking is that things are done to compensate them for the duress.”

Back up a minute, Slick.  Stressful?  Duress?  I don’t see the little ones slaving away in the kitchen to put a feast on the table.

“The Holiday is a time when children have to dress up, be on their best behavior, suffer through grueling family road trips, and deal with their more challenging relatives. ”

Chatsworth saw the cynical look on my face, so he expanded on his answer.  “Think of all the cheek pinches they have to endure from Grandma, the hair tousles from Grandpa, the noogies from Cousin Eric, the long boring stories from Uncle Randy (especially after he gets a few drinks in him), and those lectures on the evils of the opposite sex from Aunt Rose, who still swears under her breath every time she mentions ex-Uncle Pete, who doesn’t have to deal with these dinners any longer.”

Hmmm.  He did have a point.  The Thanksgivings of my youth weren’t much fun.

“My clients are willing to put on their Sunday best and their most adorable smiles while they tolerate the Holiday and the indignities that come along with it,” the lobbyist continued.  “Including having to sit at the kiddie table, which never has an ample supply of the fun foods, but is always well stocked in the veggie department.”

He was definitely winning me over and proving he was worth every nickel and dime taken from smashed piggy banks all over America.  But what could kiddos do to get their way?  I can’t picture the Calendar Commission allowing children to dictate a change in policy. 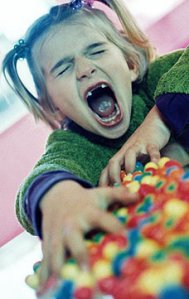 He chuckled.  “You mustn’t have kids of your own.”  I shook my head.  “You’ve seen a child react when she doesn’t get her way?  Perhaps you’ve been on an airplane with a young lad who was told he couldn’t do something?  Maybe in line behind a brother/sister combo who’ve been told they can’t order what they want?”

I searched my mind for such memories, and when I locked on those moments, the color ran from my face faster than I would try to run from a child having a tantrum.

Chatsworth smiled.  “So you understand the position of power from which we are negotiating.  Does Turkey Day need to be remembered as Tantrum Day for my clients to prove a point?  They’d really like to act mature about it, but they are underage and it wouldn’t really be their faults if they just lost it.”

That wasn’t the only weapon the All-American Kids had in their arsenal of mass disruption.

“My clients are fully prepared to pull out the big guns,” he warned with a grim look upon his face.  “I’m talking Turkey Flu.”

The Turkey Flu meant every child in the country claiming to be sick on Thanksgiving morning, thereby throwing a huge monkey wrench into the day’s plans.

“Time is tight on Thanksgiving, and nothing messes with a  schedule more than a sick child, especially one who is just faking and can really lay it on thick.”

I’d say the kids of this country have us dead to rights.  I’m going out Thanksgiving present shopping the second I post this article.  Hope I beat the crowds!

Native New Yorker who's fled to the quiet life in Maine. I write movies, root for the Yankees, and shovel lots of snow.
View all posts by Austin →
This entry was posted in Holidays, Humor, Philosophy and tagged Humor, kids, lobbyists, Modern Philosopher, presents, Sarcasm, satire, Thankful, Thanksgiving, turkey flu. Bookmark the permalink.