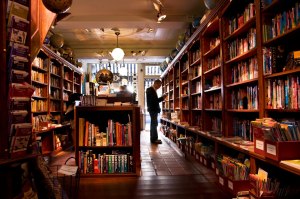 Doyle wasn’t sure why he’d picked that exact moment to look up from his book.

Even now, weeks removed from the incident, he couldn’t tell you if it was just a feeling he had, or if the Fates themselves had somehow intervened and tapped him on the shoulder.

He didn’t really care why he looked up, though.  All that mattered was that he did.

Because that was when he saw her.

“Dude,” he whispered as he tapped his friend Ryan on the elbow, and then pointed across the bookstore at the young lady who was browsing at the books on the Eastern European Religions shelf.

“Whoa,” Ryan uttered in reply, as he closed his book and sat up straight.  “And you thought hanging at the bookstore was a waste of time.  She is so your type.”

Doyle nodded his agreement.  The object of their ogling would definitely be found in the section of the bookstore marked  “Girls That Made Doyle Weak In The Knees”.

Long brown hair pulled back in a ponytail, glasses, and freckles.  Doyle certainly had a type, although at the moment, he would simply settle for anyone willing to go out with him.  He was in the middle of a horrendous dating dry spell, and his confidence was completely shot.

“You should go talk to her,” Ryan egged on his friend, knowing full well that he was in the middle of the worst dating slump of his life.  Doyle had never been a dating All-Star, but he was a solid, dependable guy, who was excellent boyfriend material.  In the hands of the right girlfriend, Doyle could be a blue chipper.

“I can’t just go up to her,” Doyle protested with a disgusted look that he didn’t actually turn to give his friend because he simply could not take his eyes off of the girl across the room.  “It’s not like this is a bar.  We’re in a bookstore.”

Doyle held up his book as if to prove his point about their whereabouts. 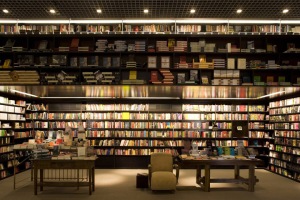 Ryan slid his chair a little closer so as not to draw any unwanted attention from the store’s staff, who did not take kindly to chatters.  “Why is it okay to walk up to a complete stranger in a bar, but not in a bookstore?”

Doyle had to admit it was a good question.  “I guess because in a bar, there’s just the implied social contract that flirting and unwanted advances are a part of the experience.  Plus, there’s alcohol involved.”

Ryan nodded.  “The presence of alcohol does seem to change the rules a bit.”

Doyle agreed, “It puts people at ease, gets them to lower their guard, and offering to buy a drink gives a person an excuse to approach the other.”

“There’s a cafe downstairs,” Ryan realized.  “Why don’t you offer to buy her a coffee?”

The girl continued to look at the books, and didn’t seem to be leaving anytime soon, so Doyle risked looking away to address his friend.  “That might work if she were down in the cafe, but I can’t just walk up to her out of the blue, interrupt her browsing, and offer to buy her a coffee.  That would just be weird.”

“Then offer to buy her a book,” Ryan suggested, really trying to help because he knew Doyle needed a little shove to get back into the game.

“Dude, those books she’s looking at are hardcovers.  They’re probably in the $25 to $30 range,” Doyle pointed out quickly because the idea had already crossed his mind.  “That’s a little too steep my budget.” 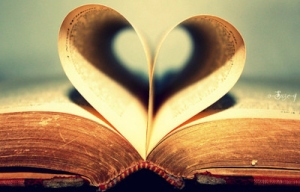 Ryan pulled out his wallet to see if he could offer any financial assistance because that’s what a good wingman did.  He assumed he was still considered a wingman in a bookstore attraction scenario.  However, the seven dollars he had to his name was not going to be of much help to his friend.

“Maybe you could go over there and pretend to be looking for a book?” Ryan was really just grasping at straws now.

“Eastern European Religion?” Doyle countered with a snicker.  “I don’t know anything about the topic.  She’d see right through me.”

Ryan shrugged.  “Maybe it’s for the better.  If she’s into Eastern European Religion, you might have nothing in common.  You can’t base a relationship on mere attraction because after a while, you’ve got nothing to talk about, right?”

Doyle nodded in agreement and admitted defeat.  He gave her one last longing look, sighed, and went back to reading.

He didn’t think it was fair that he couldn’t just walk up to an attractive woman and strike up a conversation, but dating had its rules and if anything, Doyle was a rule follower.

“Excuse me?  I’m sorry to bother you, but there are no clerks around, you’re tall, and I could really use some help getting a book up on one of the higher shelves.”

Doyle knew before he even looked up that it was her.  There was just something about the voice.  When he did finally glance up at her, she was as beautiful in person as she’d been in profile from across the room.  Now there was a gorgeous smile and big brown eyes to give him goosebumps.

Ryan kicked him under the table because he was apparently staring and not answering the very attractive young lady who’d come to ask his assistance.

“I’d love to help you,” Doyle answered and then followed her across the room to the Eastern European Religion shelves.

“I’m Sara,” she said as she flashed him a shy smile.

“Doyle,” was all he could bring himself to say because he still couldn’t believe he was walking with her and had his opening to talk to her.  A million things were going through his mind.  What should he say?  Could he ask her out?  Should he ask her out?

“Which book is it?” was what he finally decided to go with as an opening line once they arrived at the shelves. 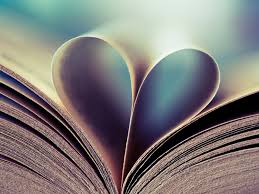 She giggled nervously and Doyle’s stomach did a little happy dance.

“I know exactly what you mean,” he assured her.  “There’s a cafe downstairs.  Do you maybe want to grab something there and chat?”

78 Responses to The Bookstore Attraction Conundrum