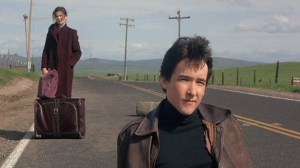 I’ve lost track, Modern Philosophers, of how many times people have stopped me on the street to ask me what my favorite John Cusack flick is.

I had the interns keeps track for a while, but I get a new batch of them every semester, and the tallies always seem to get lost.

Since I’ve been looking for new features for the blog in 2015, I thought I’d publish my first Top 5 and make it a list of my favorite John Cusack films.  I know there are other lists of top movies starring this actor, but you can trust that this is the definitive one.

1. The Sure Thing gets top billing on the list, and I know that is going to surprise many of you who haven’t even heard of this flick.  Trust me, this is Cusack at his finest.  He is so young in this movie, but perfectly cast as the cocky kid who goes off to an Ivy League college and then has to hitch a ride cross country so he can get laid in Sunny California on his Christmas Break.

The movie is directed by Rob Reiner, and features a classic scene about hitchhiking that still cracks me up every time I watch it.  Even though the premise sounds very unromantic, there is a sweet love story that this Hopeless Romantic simply adores.

It’s his best flick.  Watch it if you haven’t.  As an added bonus, John will teach you about Cassiopeia and show you how to properly shotgun a beer. 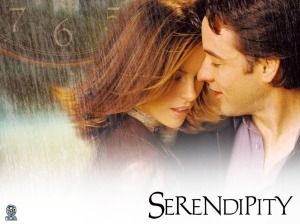 2. Serendipity is a movie I will watch anytime I stumble upon it while flipping through the channels.  I always associate it with Christmas because of the opening scenes, and I was so pleased to find it on cable over my Christmas vacation.

This is another romantic comedy that plays right into my wheelhouse because it explores the place fate and signs play in finding your true love.

The supporting cast really gives this one a bump up the list.  Kate Beckinsale is so beautiful and charming, and frequent Cusack costar Jeremy Piven is a hoot.

If you’re ever at a point where you’ve given up on finding the love of your life, watch this movie and your faith will be renewed.

Ironically, John once again teaches us about Cassiopeia in this one.

Bonus points for being set in New York! 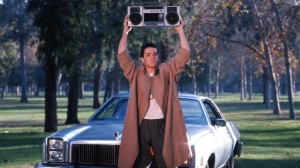 3. Say Anything… I don’t even need the movie poster for this one.  You see that iconic photo of John in the trench coat with the boom box held over his head, and you know what the flick is.

I’m sure many of you will argue that this is the best Cusack film out there, but I say it’s too much of a downer at times to snag that top spot.  Plus, the ending really is annoying.

Lloyd Dobler is the greatest Cuscack character of all time, though.  Cameron Crowe deserves major props for his writing and directing.

“I gave her my heart, she gave me a pen.” — Lloyd’s most memorable line.

“I called her up.” — Lloyd’s awesome response when asked how he got Diane Court to go out with him.

I’ll never hear “In Your Eyes” and not think about this film. 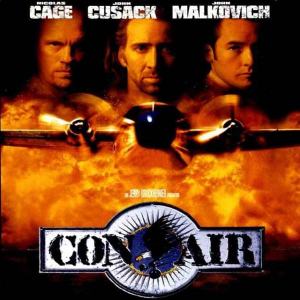 Sure, Cusack isn’t the main character in this one, but that’s his name and face right there on the poster of an action flick with an All-Star cast.

Who doesn’t love a movie with dialogue that’s as kick ass as the action? 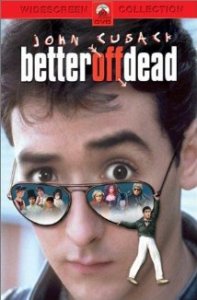 5. Better Off Dead I’m totally blowing your minds with this one, aren’t I?  While probably even more obscure than The Sure Thing, it’s also freakin’ hilarious.

Another flick starring a very young John Cusack, it’s a romantic comedy with a suicide subplot, which makes for some very dark comedy.

This one is memorable for Curtis Armstrong in the sidekick role, the paperboy with a blood thirst for this two dollars, and the Japanese drag racers who talk like Howard Cosell.

Of course, I can’t forget the beautiful French foreign exchange student who catches John’s eye and utters a hilarious line about testicles.

And keep an eye on John’s little brother.

I know you’ve never seen it, so why not plan a double feature of this and The Sure Thing?  You’ll thank me later.

Honorable Mention: I’m sure there are those of you demanding to know why High Fidelity, Grosse Pointe Blank, Being John Malkovich, and Sixteen Candles did not make the list.  My answer would be that it’s because a Top 5 only has five slots!

Native New Yorker who's fled to the quiet life in Maine. I write movies, root for the Yankees, and shovel lots of snow.
View all posts by Austin →
This entry was posted in Humor, Philosophy and tagged Better Off Dead, Con Air, Humor, John Cusack, Modern Philosopher, My Top 5, Sarcasm, satire, Say Anything, Serendipity, The Sure Thing. Bookmark the permalink.