It’s Chilly Outside, So There’s Chili In The Kitchen

It is another chilly Winter day in Maine, Modern Philosophers, so I thought it should be a warm, chili day at The House on the Hill!

As you can see from the photo on the left, I had a camera crew following me around as I traded it my toga for an apron.  I do look devilishly handsome today, don’t I?

Since the camera crew was there, I thought it would be fun to share some of the photos from the shoot with you.

Are you ready to step inside The Modern Philosopher’s Kitchen?

I know it’s hard to believe, but all you need to make this delightful feast is a frying pan and a big pot.  Luckily for me, I had both.

I guess a stove is also necessary, but I figured that was a given.  This is supposed to be fun.  Don’t be a stickler for details!

The ingredients posed for a group photo before I got to work.

The corn chips were suggested by my friend Jen, who likes to put down a layer of those on her plate before topping them with chili and cheese.

Yes, I bought two different packs of seasoning mix.  They each had a slightly different recipe on the back, and I wanted to make an all powerful chili hybrid.

The mushrooms are an addition I made on a whim.  I like mushrooms and wanted to see how they would taste in chili.  That’s how my mind works! 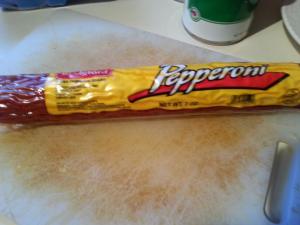 Here is my secret weapon for this weekend’s batch of chili, Modern Philosophers.

The first time I made chili a few months ago, it came out tasting very bland.  So the next time I made it, I added sausage.  Another one of my whim additions, and it ended up really adding some flavor.

I planned to use sausage again, but my friend Erica told me how she likes to add pepperoni to her chili to really spice it up.

I’m a huge fan of pepperoni, so she didn’t have to suggest it twice.

Of course, I might’ve eaten several slices of pepperoni as I was slicing it for the chili, but no one really needs to know about that, right? 🙂

Here’s a shot of everything but the meat simmering in the big pot.  That looks incredibly healthy for something that is going to taste so good.

I’m very curious to see what the pepperoni adds to it. 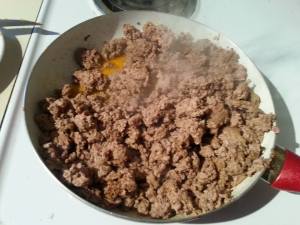 The meat is almost ready.  I used two lbs because I doubled the recipe to make enough to heat up for dinner all week.

I don’t like to cook after a long day at work, as I’d rather spend my time at The House on the Hill writing, relaxing, and playing with the kitties.  So it makes sense to whip up a big meal over the weekend and then heat up the leftovers after work.

The meat has been added to the rest of the ingredients.  I’m going to let it simmer on low heat all afternoon, and at some point, chili will be born.

The House on the Hill smells so good right now, Modern Philosophers.  Wish you could come over to watch the game and have some chili.

So what do you think, Modern Philosophers?  Does my chili look good?  Do you have a kick ass chili recipe?  What’s your comfort food on a cold, Winter weekend?  Will you send me some of whatever it is?

Native New Yorker who's fled to the quiet life in Maine. I write movies, root for the Yankees, and shovel lots of snow.
View all posts by Austin →
This entry was posted in Humor, Philosophy and tagged chef, chili, comfort food, Cooking, Humor, kitchen, Modern Philosopher, photos, Sarcasm, satire. Bookmark the permalink.

33 Responses to It’s Chilly Outside, So There’s Chili In The Kitchen