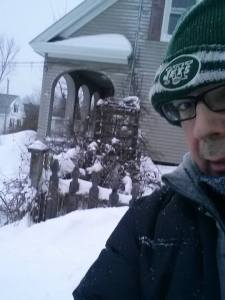 Renowned snow disorder specialist Dr. Jekyll was kind enough to come to The House on the Hill today to discuss these odd food cravings.

“Thank you for having me, Austin!” Dr. Jekyll declared as he took a big sip of the Snapple I provided.  “I had to get out of the office.  So many patients were in the waiting room, staining my carpets and furniture with their melting ice cream and lukewarm potatoes.  It was extremely revolting.  Wait until Hyde returns to find that mess waiting for him!”

Why is everyone craving those two foods, Doc?

“Isn’t it obvious?” he quickly replied.  “I know your case of Post Traumatic Snow Disorder is severe, but your Modern Philosopher’s brain should still be able to process that vanilla ice cream and mashed potatoes look like snow.”

Dear Zeus!  Am I that far gone that I didn’t notice that?  The interns need to remind me to refill my PTSD meds!

“The next stage of the disorder is cravings getting so out of control that people begin to eat snow, thinking it is the foods they crave,” Dr. Jekyll went on to explain.  “While that might not sound very healthy, it’s not going to cause too much internal distress unless one eats an ungodly amount or snow, or if a person ingests the yellow snow.”

Good to know I have this to look forward to at some point in the near future.

“The good news is that the consuming of snow is one of the final stage of Post Traumatic Snow Disorder,” he told me as he finished his Snapple.  “Once the snow is inside of you, you have become one with the cause of your anxiety.  It puts a refreshing, Philosophical spin on the question of What’s eating you?”

I suppose it’s also an alternate way to get rid of all the snow that has piled up in Maine over the past week.

“To all the people out there who can’t stop obsessing over vanilla ice cream and mashed potatoes, I suggest that you drink a lot of water and surround yourself with plenty of color.  White is your enemy right now, and it will only increase your cravings.”

“Reading is an excellent distraction, just as long as the stories you choose are not set in the Winter or on a snowy mountaintop.”

The Hannaford and Shaws supermarket chains have reported that they are completely out of potatoes, instant mashed potatoes, and vanilla ice cream.  Governor LePage has not yet declared a State of Emergency (McDonald’s hasn’t run out of Big Macs, after all!), but extra police officers have been put on the street in case Mainers riot in search of the food they think they must absolutely have.

“Rioting is definitely a danger during this widespread of a PTSD epidemic,” Dr. Jekyll informed me as he popped the cap on a second Snapple.  “This is why we actually want people to start eating snow.  It will quell the cravings, prevent riots, and clear the streets of snow, which in turn, will lessen the anxiety of Post Traumatic Snow Disorder sufferers.”

Dr. Jekyll reassured me that current behaviors are normal, and that once the snow stops falling for a few consecutive days, people will get back to feeling normal on their own.

He did say that if anyone were to build models of Devil’s Tower with their mashed potatoes or vanilla ice cream, it could be a sign of an Alien Invasion, and authorities should be notified immediately.

Enjoy your potatoes and ice cream, Modern Philosophers, and do your best to avoid the yellow snow.  We’ll all feel normal again really soon…