St. Patrick To Star In Snakes On A Plane Sequel

Do It Again Pictures announced today that it is going into production on a sequel to the 2006 non-blockbuster, Snakes on a Plane, Modern Philosophers.

The much anticipated action film will be released on St. Patrick’s Day 2016.

Samuel L. Jackson will not be back for the sequel.  Instead, the second installment will star St. Patrick, best known for driving the snakes out of Ireland (as well as for having a hard partying holiday named after him).

Why make a sequel to a movie that hardly anyone saw in the first place?

“Next year is the tenth anniversary of the original, so we thought we would capitalize on that,” Do It Again Pictures president Damon Javieux told this Modern Philosopher.  “Plus, there really aren’t any classic St. Patrick’s Day action movies out there, so my partner and I set out to right a screenplay that would rectify that situation.”

Javieux and his writing partner took a leap of faith and wrote a script with plans to cast the Irish saint in the lead, even though they knew he had been dead for over 1500 years.

“This is Hollywood,” Javieux reminded me.  “Miracles happen everyday.  And with St. Patrick being a saint and all, we figured that would increase the chance of our being able to land him to star in the picture.” 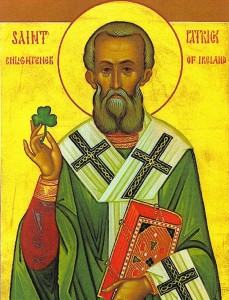 The screenplay definitely plays to St. Patrick’s strengths.  The plot of Snakes on a Plane 2: Get Yer Irish Up focuses on the last leg of Pope Francis’ world tour.  After the Pontiff’s plane leaves Ireland, the crew discovers that terrorists have planted hundreds of poisonous snakes on board.

“This time, St. Patrick is flying the snakes out of Ireland,” Javieux explained excitedly.  “But now he’s got to make sure that they don’t kill the Pope or make it to Vatican City.”

According to the producer, there is much action, plenty of thrills, and a ton of snakes.

“Half of our budget went towards snakes,” he continued.  “Most of them are computer generated, but there are some real ones in there.  You won’t find any cheesy rubber snakes in this film!”

Given St. Patrick’s past history with snakes, Javieux and his partner were confident that the saint would be comfortable working with the real thing.  The filmmaker joked that his only fear was that the snakes would refuse to work with St. Patrick.

How did Do It Again Pictures find the money to make this film, which is rumored to have a budget of $75M, and get a long dead saint to agree to become an action star?

Credit for that belongs to Javieux’s partner, Pope Francis.

“How exciting is this, my friend?” The Partying Pontiff asked me via Skype.  “I’m so sorry I couldn’t ask you to write the screenplay.  Damon was adamant that he should write it himself.  I was finally able to get him to let me take a pass at the rewrite, but any time I brought up hiring another screenwriter, he would act like he was possessed.  He’s something of a diva.”

Pope Francis, who has done his best to drag the Catholic Church into the 21st Century, explained that The Vatican has been long interested in getting into the movie business.

“I want to make movies that show the Church in a good light, that remind people that religion is entertaining and fun, and turn the saints into stars.  I long for our children to grow up wanting to be like the saints, and what better way to do that than by turning one of them into an action movie hero?”

Once The Holy Father was happy with the script, he agreed to not only finance it, but to also use his connection with God to bring St. Patrick back to play the role of a lifetime.

“Paddy was so excited after he read the screenplay, that I didn’t have to do any convincing,” Pope Francis bragged.  “He was thrilled that it would take him back to Ireland, and he loved the idea of modernizing the St. Patrick snake tale for a new generation.”

The Pontiff was a little upset that an actor will be playing him in the film, but he understood why The Vatican’s lawyers would not allow him to tackle the role on his own.

“They need me around to make sure more movies get made,” Pope Francis joked.

I predict that the Luck of the Irish will smile upon this flick, and that St. Patrick has a big time action career ahead of him.  I’m already planning to write a screenplay where St. Patrick and Liam Neeson team up to kick some serious sinners’ ass!

Native New Yorker who's fled to the quiet life in Maine. I write movies, root for the Yankees, and shovel lots of snow.
View all posts by Austin →
This entry was posted in Holidays, Humor, Philosophy and tagged Humor, Irish, Modern Philosopher, movies, Pope Francis, sarcasm, satire, Snakes, Snakes on a Plane, St Patrick, St Patricks' Day. Bookmark the permalink.

16 Responses to St. Patrick To Star In Snakes On A Plane Sequel