I wasn’t sure of the best way to reach your Complaint Department, so I thought I would just write to you on my blog and trust the power of the internet and social media to get this to the proper people.

Let me start by saying that I love your service.  I listen to your Foo Fighters Channel when I run, and the music definitely inspires me to run harder and faster.  Who wouldn’t get pumped up to the beat of tunes by Dave Grohl and the boys, as well as bands with a similar sound?

On this morning’s run, I heard some Foo Fighters, Smashing Pumpkins, Green Day, Bush, Red Hot Chili Peppers, Nirvana, and Weezer just to name a few.  All excellent songs for the task at hand.

There was one slight problem with the morning mix, however, and that’s why I’m writing. 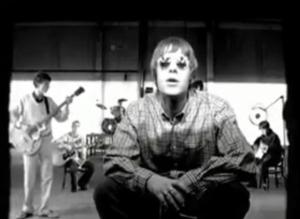 You played “Wonderwall” by Oasis.

Do you see the problem with that?

It’s the Foo Fighters Channel, and somehow, the Gallagher Brothers ended up crooning in my ear buds somewhere on the third mile of my run.

I know you offer that wonderful option to pass on a song by clicking on the icon, but when I’m running, my phone is tucked away in my sweatshirt, and I can’t break stride to dig it out and cancel a song.

So I had to suffer through four excruciating minutes while that song infected my ears.  I’m lucky I didn’t run out into traffic because I was so damn disoriented by it.

Can you please go into my file and put me down as a permanent “NO!” on not only this song, but on Oasis altogether?

I know “Wonderwall” is a very popular song, but it’s just not my cup of English Breakfast Tea if you catch my meaning.

If I had my druthers, the Foo Fighters Channel would only play Foo Fighters songs, but I know you’ve got all those albums lying around the office and your DJs need to spin them to keep all the bands happy.

Could you just play more Foo and less poo? (for lack of a better term, and because I like a good rhyme)

And while I have you, why is it so difficult to exit your app once I’m done listening to it?  You make it nearly impossible to close Pandora’s box, and that can be extremely frustrating.

Thanks for listening.  Rock on!

Austin aka The Modern Philosopher