I know the day started with my grumbling about the blog, Modern Philosophers, and I totally appreciate the support and kind words I received from so many of you.

As fate would have it, this was the day of the next taping of The Nite Show With Danny Cashman, and it couldn’t have come at a better time.

I wish you all lived in Maine so you could attend the tapings.  For this Modern Philosopher, there is nothing cooler than being in the Gracie Theatre to watch the magic happen.  I’m not just saying that because I’m one of the writers, and I enjoy listening to the audience laugh and applaud at my jokes.

Watching a TV show come together is just a thrill for me.  If I could do this every day of my life, I would be a very happy man, and never again write grumbly posts on my blog.

Well, except when I talk about dating…I don’t think I’ll ever understand that. 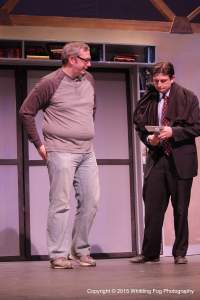 As I mentioned in my earlier post, I appeared in another sketch tonight.  I don’t want to give away too many details, but I did get to hang out with nine of the show’s writers for the bit.  The audience applauded when Danny introduced me, I didn’t mess up my lines, and laughter ensued.

Thanks to Jen Murphy for the photo on the left, which shows me doing my thing tonight.  Yes, Danny has a pair of men’s slacks wrapped around his neck.

I always get so nervous when I get up before the live studio audience and all those cameras and bright lights, but this was the most confident I’ve felt of my three appearances.

Maybe I’m getting the hang of being in front of the camera.  I look like a total dork, but what’s new, am I right?

My friend Angela, who very well might be the person upon whom a very popular blog character is based, was in attendance to cheer me on and that really helped.  I finally got to meet her boyfriend, and it was just nice to have a friend there to support me.

The three shows went incredibly well.  So many great guests.  You’ll just have to tune in the next three Saturday nights to see how it went.

This photo will give you a clue as to which popular Maine based reality show was represented at tonight’s taping.

I guess what I’m trying to say in the end is that if you ever wake up on the wrong side of the writing bed, Modern Philosophers, a great way to improve your mood is to go to the taping of a hilarious and entertaining TV show.

If you’re one of the show’s writers and can arrange to get some camera time, even better.  I swear it will do wonders for your outlook on writing and life.

If you need an idea for which show to attend, I highly recommend The Nite Show With Danny Cashman.

As I’m often heard to say, “There’s no business like The Nite Show business”.