Think Of It As Friday Eve

A fog of confusion hung over The House on the Hill this morning, Modern Philosophers.

I awakened from an odd dream convinced that it was Friday (which would be a good thing), and realized I had not prepared or purchased anything for the Potluck at work (which was a bad thing).

Unsure of what day it was, I set out to find someone to set me straight.

I scampered up to the attic, to ask the Woodburys, the Ghost Family that haunts The House on the Hill.  As the original owners of my home, I was sure they would know what day of the week it was.

However, when I asked Grandpa Jebediah, he gave me a confused look and then finally told me it was 1879.

I decided to climb out of the attic window and onto the roof to ask Gary, my loyal Gargoyle.  My safety is Gary’s top priority, so I was certain he would have the information vital to helping me maintain my sanity.

Unfortunately, I had arrived at an inopportune time.  I could see my Gargoyle circling in the sky off in the distance as a pack of Flying Monkeys playfully chased after him.

Drat!  I really wanted it to be Friday, but then again, I didn’t want to have to rush to the grocery store to buy something for the Potluck.  I needed an answer.  There had to be someone in The House on the Hill who knew what day it was.

I went back into the house and rushed down the stairs.  I had been awakened in the middle of the night by a loud noise in the living room.

Since Gary hadn’t immediately appeared at my bedside to rescue me, I knew that the intruder had to be Seamus.  Maine’s only Leprechaun liked to sleep off his hangovers on my couch.

When I rushed into the living room, however, Seamus was nowhere to be found.  On a hunch, I headed for the bathroom.  Sure enough, the little guy was passed out in my bathtub, his shillelagh clutched at his side.

Just when I was about to give up and go back to bed, the front door opened and one of the interns entered.  I don’t know their names (why get attached when they are only going to leave at the end of the semester?), but I thought of this one as “Tall, redheaded dude, who needs to realize sweatpants aren’t proper work attire”.

“What day is it?” I asked the aforementioned intern.

“Thursday,” he replied, making him the only intern to land a speaking part on the blog this semester.  Congratulations. 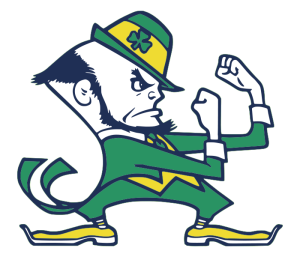 “Cool,” I replied.  “I’ve got to get ready for work.  Can you make sure someone goes up to the grocery store today to buy something for my Potluck tomorrow?  Grab a few coins out of Seamus’ pot of gold to pay for it.  He’s not going to miss it.”

The intern nodded, and I trudged back up the stairs to get my clothes for work.

I wasn’t thrilled that it was only Thursday and I had one more workday to contend with, but I decided to think of today as Friday Eve.  That just sounded more festive, and I bet it will help make the day pass a little quicker.

Native New Yorker who's fled to the quiet life in Maine. I write movies, root for the Yankees, and shovel lots of snow.
View all posts by Austin →
This entry was posted in Humor, Philosophy and tagged Friday, gargoyle, Ghosts, Humor, Leprechaun, Modern Philosopher, potluck, Sarcasm, satire, Thursday, work week. Bookmark the permalink.

14 Responses to Think Of It As Friday Eve