The Sweaty Dog Days Of August Have Arrived! 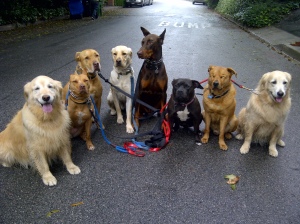 That incessant barking that kept waking you up all morning was from the Dog Days of August.  They have arrived, and you need to Jump Start Your Summer before all that’s left to do is clean up after those dogs.

As you can tell by the witty turn of a phrase in the previous paragraph, this Saturday’s  Jump Start Your Brain post has been transformed into a Jump Start Your Summer one.

That’s right, my fellow toga wearers, August is here.  Interesting tangent…the name Austin is a derivative of Augustine, which come from that root word August.

It fits me well, don’t you think?  All joking aside, Modern Philosophers, August is a month that demands your respect.  Get up off your butts and do something worthy of the name.

Your Summer is slipping away, after all.

I Jump Started my August with a four mile run.   Look at the pain and anguish on that handsome face!  (Yes, ladies, I’m single.  Contact me in the comments if you’re interested!)

It was hot, humid, gross, icky, sticky, and disgusting out there, but I managed to push myself through my eighteenth run in the last twenty-six days.  I’ve remained faithful to my five day a week running schedule, and it is beginning to pay off.

I’m definitely losing weight, I feel better, and even though I ran a slow and steady pace because of the heat, I could tell that my body was reacting better to the hills and being out on the road.

That’s a definite confidence builder.  I always get angry at myself when I stop running  and have to begin the process all over again.  Once my body gets to a point where it has accepted running as a regular part of its day, I know I’m making progress. 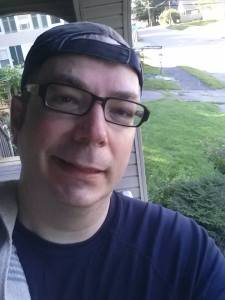 I was sweating like a pack of dogs when I finally got back to The House on the Hill, so I dumped a bottle of cold water on my head.

That felt so good!

As I did my cooling off walk, I noticed workmen setting up a bounce house on the front lawn of a house down the street.

Now that I’m showered and presentable, I’m thinking about heading down there and seeing if just anyone can make use of that thing.

What better way to Jump Start August than by going a few rounds in a bounce house?  It’s exercise and fun all rolled up into one!

Of course, before there could be any fun and frolic, I had to finish Jump Starting My Summer.  That meant completing the second event of my Homeowner’s Biathlon.

The mowing of the Great Lawn of The House on the Hill was next.  While that was supposed to be just a simple chore, it turned into an exciting adventure.

It began with a Philosophical moment when I tweeted: If I had The Force, would I use it to propel the lawn mower, or to will the grass to stop growing? #whatwouldObiWando

That was when the Dark Side decided to mess with me.  I noticed the oil cap bouncing around on the mower, and shortly after I secured it, smoke began to billow out of the side of the mower.

I didn’t panic, however, as this had actually happened last Summer (I did panic then because I thought the mower was on fire).  Luckily, I learn from my mistakes, and knew this meant that some oil has spilled out onto the hot engine.

I turned off the mower, wiped down the side of it, and then poured water on it.  Crisis averted.  A few minutes later, I was back to enjoying my mow job.

Nothing Jump Starts a day, a month, a season, or anything else for that matter, like a journey to Walmart.

I hate going to that store, but it’s local, it’s cheap, and I knew they’d have exactly what I needed.  Sadly, I tore my favorite pair of work pants trying to escape my shackles on Thursday.  That meant it was time for an adventure.

It actually went quite well.  I not only bought two new pairs of pants, but I also splurged on three shirts, and the second of the two chair cushions in the above photo.

I bought the first cushion around Memorial Day.  I wasn’t sure if it was the right size, or if it would be comfy enough for my delicate bottom (no jokes, I make the jokes on this blog!), so I only bought one.

Sitting on the front porch is one of my favorite things to do, but it is also deeply associated with The Girl Who Moved Away.  We’d sit out here all the time, hold hands, drink wine, and just chill.  It became such an important part of our relationship that we decided to name the Children’s Book Publishing Company we dreamed of starting “Porch & Jug Publications” (our favorite wine comes in a jug).

So you might understand my hesitance, as buying a second seat cushion would mean that someone else had decided to sit next to me.  While I’d like that very much, I still think of it as her chair.

I thought it an excellent sign, though, that I finally bought the cushion (Jump Start My Love Life???). 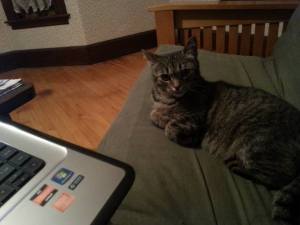 Of course, the only way to properly Jump Start My Summer is to get a lot of writing done.  Here’s a photo of last night’s writing adventure.  Miss Luna was my writing partner, and she kept insisting that I add more catnip to every scene.

I’ve babbled so long that it might be September already.  What are you going to do to Jump Start Your Summer?

Native New Yorker who's fled to the quiet life in Maine. I write movies, root for the Yankees, and shovel lots of snow.
View all posts by Austin →
This entry was posted in Fitness, Humor, Philosophy and tagged August, Humor, life, Modern Philosopher, mowing the lawn, running, Sarcasm, satire, Shopping, Summer, Walmart. Bookmark the permalink.

19 Responses to The Sweaty Dog Days Of August Have Arrived!