Put That Kid On A Wheaties Box! 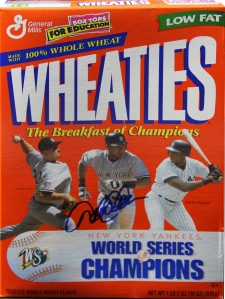 I don’t know what got into me this morning, Modern Philosophers!

I woke up at 5:00 and could not fall back to sleep.  For once, I wasn’t sore upon getting out of bed.

Was it possible that as I entered the sixth week of my running program, my body was finally getting used to all the exercise?

I was so full of energy that I even lifted weights before my morning run.

My running toga flowed behind me like a cape as I charged up the first hill.  I felt like a Superhero, and nothing was going to stop me.

It was a great morning.  A little chilly, which is perfect running weather in my book.  The sun was rising in the distance, and I ran towards it with determination, like I wanted to touch it before it rose beyond my reach.

I saw another runner up ahead of me, and picked up the pace to see how much I could narrow the gap between us.

I run 3 miles during the week, and 4 miles on the weekend.  However, I slowly started to increase the length of my weekday runs last week.  It wasn’t much…maybe bumping it up to 3.25 miles.

This morning, though, I just felt so good.  I’d gotten out of The House on the Hill fifteen minutes earlier than usual, so I had plenty of time on my hands.

Maybe that was why my legs just kept propelling me forward when I got to the 1.5 mile mark, and then again when I reached the furthest point I’d run last week.

Today, I just keep heading for the sun.

And before I knew it, I had arrived at the 2 mile mark.

I stopped for a second to snap a couple of photos because the sun was just so brilliant, and then I turned around and headed for The House on the Hill.

And you know what?  I picked up the pace.  I normally hit a wall on that first half mile home, but this morning, my legs felt so damn strong.  There was no burning in my lungs.  I turned up the music and just kept running.

When I hit that last, pain in the @$$ hill near the end of the run, I charged up it like there was a giant plate of salt and vinegar chicken wings waiting for me at the top.

Then I glided the rest of the way to The House on the Hill.

I have absolutely no idea what possessed me to run 4 miles this morning.  It felt damned good, though.

I’ll happily pee in a cup for you because I know there were no performance enhancers involved in my sweaty version of the running man. 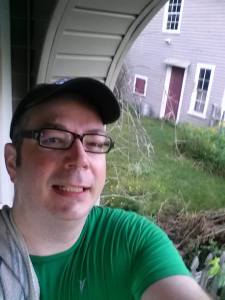 I did, however, have a really great phone conversation last night with a beautiful Daredevil.  Maybe that was what put the spring in my step.  One never knows.

I saw the Health Coach at work today, and regaled him with tales of 4 mile runs and my 9lb weight loss.  He seemed genuinely impressed and pleased.

There is something very rewarding about telling people that I’ve lost weight and am kicking butt on a daily basis.  Of course, nothing feels better than knowing that I am making some major improvements in my life.

When I was a kid, skinny as a rail, and looked like I would be blown across the room if someone sneezed in my general direction, my Dad would tell me to eat my Wheaties.  It was the Breakfast of Champions, after all, and the best way for a scrawny kid from Brooklyn to get strong enough to perform like the athletes who famously graced the boxes.

I haven’t had my Wheaties in a very long time, but I am available to pose for the box.

I mean, how could you pass up on a face like this, General Mills?

I’m out on the porch now, writing as I listen to the rain, and I’m still feeling the runner’s high from my morning run.

I don’t want to be that guy who preaches at you to run, run, run, so I’m just going to let my blog posts fill your head with Deep Thoughts on the subject.

I hope you all had a great Tuesday.  I know I did!

12 Responses to Put That Kid On A Wheaties Box!