Man Arrested For Assault After Hitting The Bottle 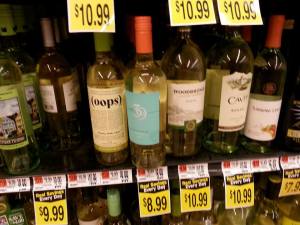 Rough days.  We’ve all had a few, Modern Philosophers.

Maybe not as rough as Ryan Doyle, a Milford resident, who was arrested for assault this afternoon after police were called to the local Hannaford.

Doyle, a lifelong Mainer, who other customers described as “weird”, “somewhat stressed”, and “not a particularly good dresser”, reportedly caused quite a disturbance in Aisle 3.

“The wine aisle,” store manager April Gordon explained to this Modern Philosopher.  “However, you can find soup, beans, gravy, and canned vegetables there as well.”

Multiple witnesses told authorities that Doyle stared at the wine for the longest time and then went “wicked ape #$%^”.

“He was mumbling something about how the wine was looking at him funny,” stated a fellow shopper, who asked not to be identified.  “Then he started yelling at the bottles about how tough they must feel since they were ganging up on him and had him outnumbered by such an incredible margin.”

And that, Modern Philosophers, is when Ryan Doyle hit the bottle…

There was a heated debate among the witnesses as to which bottle Doyle hit.

Some said it was a cheap domestic bottle.  Others insist it was a very expensive French bottle (the French do have it coming at times, don’t they??).  Still others told me that it was a quaint little 2013 Pinot Grigio.

The one thing they all agreed upon, however, was that it was a white wine.

At this point, the authorities are not releasing the identity of the victim.  Hannaford officials have asked the public to respect the wine’s right to privacy.

“How would you feel if you were the victim of an unprovoked and vicious assault in broad daylight?” Detective James Bartels asked somewhat rhetorically.  “We will not release the name of the wine before its time.” 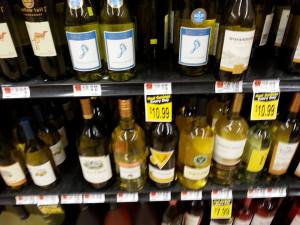 The suspect asked to speak to this Modern Philosopher because he wanted to get his story out there before he was tried in the court of popular opinion.

“Look, I’m embarrassed to admit this, but sometimes, after a stressful day, I have been known to hit the bottle,” an ashamed Doyle told me through the bars of his holding cell at the Penobscot County Courthouse.

“I’m not proud of myself,” he continued as he wiped tears from his face.  “I’ve gone to Anger Management classes, I’ve spoken to therapists, hell, I even got a job at a bottling plant so I could better relate the bottles.  Maybe that last one wasn’t such a good idea.”

Doyle would not go into details about his last statement, but my source at the courthouse told me that there is a pending class action suit against the suspect, filed by dozens of bottles across the state of Maine.

“What was I supposed to do?” he asked once he realized I wasn’t giving him any sympathy.  “Just let those bottles gang up on me, talk smack, and act like it didn’t bother me?  If they’re gonna dish it out, then they need to toughen up and expect a little something in return!”

“This young man needs help,” Cy Brown, the blog’s Legal Expert assured me.  “This isn’t the first time he’s hit the bottle, and my gut tells me it won’t be the last unless drastic measures are taken.”

The District Attorney declined to comment for this post.  However, he is a well known collector of antique bottles, so this does not bode well for Doyle.

When I have a rough day, Modern Philosophers, I turn to the bottle, but I certainly don’t hit it.  The Nuns raised me right.

Besides, I want to drink my bottle of Snapple, not go ten rounds with it.

After covering this story, I drove straight to the store to pick up that bottle of Snapple.

Yeah, it was one of those days, but I’m not going to take out my anger and frustration on a defenseless bottle.  The thing doesn’t even have arms.

Hey, Mr. Doyle, either learn how to control your rage, or try picking on someone your own size next time!

Native New Yorker who's fled to the quiet life in Maine. I write movies, root for the Yankees, and shovel lots of snow.
View all posts by Austin →
This entry was posted in Humor, Philosophy and tagged bottles, crime, drinking, hard day, Humor, life, Modern Philosopher, police, Sarcasm, satire, stress. Bookmark the permalink.

8 Responses to Man Arrested For Assault After Hitting The Bottle