Ryan leaned over to kiss his new bride, whispered something in her ear, and then reached for his glass of champagne.

He stood up, tapped the flute several times with a knife, and a hush fell over the room.  All eyes turned towards the dais and the handsome groom.

“I know it’s traditional for members of the wedding party to toast the bride and groom, but Emma and I have always been a little nontraditional.”

As he paused to allow the laughter to fill the room, Emma reached out and touched his arm affectionately.

“We’d actually like to toast our wedding party,” Ryan continued as he made eye contact with the eight men and women seated on the dais with the newlyweds.

“As some of you may know, every bridesmaid and groomsman was present the night that Emma and I first met.  Because they are all heavy drinkers with absolutely no sense of self control, what should’ve been a miserable night for me ended up being one of the happiest of my life.”

Everyone on the dais laughed as they thought back to that fateful night.

“You see, my buddies wanted to go out to drink, watch the game, and prowl for the ladies like stereotypical single males,” Ryan said with a chuckle.

That earned him a big laugh from the wedding guests, and a series of nods from his smiling groomsmen.

“What they didn’t want to do was worry about how they were going to get home after they inevitably struck out with the ladies and our team lost.  That meant that I was hounded, harassed, bribed, and threatened until I finally agreed to be the designated driver.”

At this point, Ryan turned to Emma, took her hand in his, and while looking directly into her eyes said, “Best decision I ever made”.

While the guests applauded, Ryan helped his blushing bride to her feet, where she raised her glass as well.

“Meanwhile, I had drawn the short straw, and was forced into designated driver duty for my future bridesmaids,” Emma picked up the story.  “Some idiot, whose name I can’t even remember, had broken Lindsey’s heart, and we had agreed to take her out drinking to get her mind off of him.  Plus, we were afraid that if we left her home alone, she would eat every last pint of ice cream available in the city.” 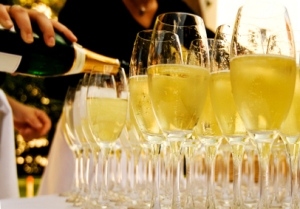 Lindsey bowed her head in embarrassment while the other bridesmaid nodded in agreement and the guests laughed.

“So while they partied with riffraff like these hooligans to my right,” Emma joked as she nodded in the direction of her husband’s groomsmen, “I nursed a Diet Coke in a booth in the back corner.”

“I passed by on my way back from the restroom, and noticed the most beautiful woman I’d ever seen, just sitting there all alone in the shadows,” Ryan told their guests, who were hanging on every word at this point.

“I really wasn’t in the mood to meet anyone that night,” Emma admitted, “but I was bored, far too sober, and he was just so darn handsome.”

“Before you could say ‘You’re in no condition to drive’, we were sharing a round of Shirley Temples and bonding over being suckered into designated driver duty,” Ryan finished her thought and then leaned in for a big kiss. 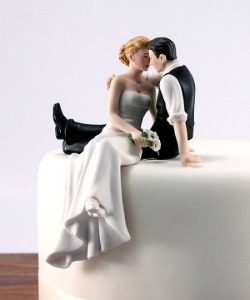 Once the hooting and hollering had died down from the guests, the bride and groom each turned to face the corresponding members of their wedding party.

In unison, they finished the toast: “To the best friends we could ever hope to have.  Thank you for forcing us to do something we really didn’t want to do.  Thank you for picking that night, that bar, and for ditching us at just the right moment.  We love you guys and owe you big time.”

12 Responses to The Wedding Toast