“You’re not watching football?” The Devil asked in confusion as he entered the living room with a platter of Hell Fire Wings.

I looked up from my laptop, glanced at the TV, which was was currently off, and then looked at my house guest in the thousand dollar suit.

“The Jets weren’t on, and I’ve got to write monologue jokes, so I just figured it would be better to work in silence,” I explained.

Lucifer walked over and set down the chicken wings temptingly close to me.

“The Nite Show goes back into production this week, right?” he queried and a Devilish grin grew on his face as he observed how the wings’ scent was distracting me.  “When are you going to talk to Danny about having me on as a guest?”

“I don’t think that’s ever going to happen,” I admitted.  “Danny really tries to keep religion out of the show, and you’d be quite the controversial guest, don’t you think?”

“Sure,” he acknowledged as he walked around to sit on the other end of the couch.  “Controversy boosts ratings, though, doesn’t it?” 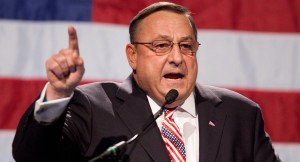 “And what would you discuss as a guest?” I asked as I closed my laptop since I apparently wasn’t going to be writing any time soon.  “Would you be willing to tell Danny the deal Governor LePage made with you in order to get elected twice?”

The Prince of Darkness clapped in delight and then readjusted his cuff links to make sure they were perfectly placed again.

“That’s a good one,” he chuckled.  “You should figure out how to turn that into a monologue joke for Wednesday night.”

I gave him a look like he was crazy, but I was secretly making a mental note to see if I could, in fact, turn that into a joke for Danny.

“You can turn on the game if you want,” invited the host of the year.  “Thanks for bringing your infamous Hell Fire Wings.” 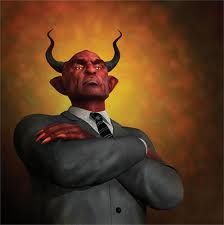 “I am an excellent guest,” Satan declared with a straight face as he snatched the remote and turned on the TV.  “So how about that comeback by your beloved Fighting Irish last night?  Do you think that was a miracle from above, or did some dedicated Notre Dame fan make a deal with me?”

He flashed a Devilish grin and reached for one of the chicken wings, careful not to drip any of the sauce on his perfectly tailored suit.

“It was a Hell of a game,” I replied, not intending to make that particular pun.  “I don’t really care how they won, just as long as they did.  However, if it was a deal with you, thanks for stepping in to make sure the good guys won.”

The Devil winked and then took a huge bite of his chicken wing.  Not wanting to be rude and make my guest eat alone, I grabbed a wing of my own.

“I appreciate your letting me watch the games up here,” Lucifer said sincerely as he handed me a Snapple from the cooler and then grabbed one for himself.

“Do you not have football in Hell?” I asked as I wiped Hell Fire sauce off my face.

“Oh, we have football.  In fact, I’ve got an entire ring dedicated to it,” The Prince of Darkness informed me after taking a sip of his Snapple.  “I just don’t enjoy watching it with The Damned because it is not a fun experience for them.”

“I’ll bite,” I offered with a reluctant sigh.  “Why isn’t football an enjoyable experience for those in Hell?”

Asking such questions always led to revelations about the inner workings of Hell that often caught me off guard, fascinated me, or sent me running to Church to beg forgiveness so that I never had to spend a second in my guest’s domain.

“As you know, there are two kinds of football,” Satan began.  “Real football, known and loved by billions around the world, and American football, a violent game adored by you and your fellow countrymen.”

“Who would argue that our brand of football is real football,” I corrected him.  “That other boring snooze fest is called soccer.”

He chuckled, finished his wing, and then meticulously cleaned his fingers with a wet nap that he simply made materialize because he was The Devil.

“Since Hell is not meant to be fun, I force all the soccer fans to watch American football, while the football fans have to watch soccer,” he detailed with a smug smile.  “It really is one of my greatest forms of punishment yet.”

“As much as I hate soccer, I might survive that ring of Hell as long as you had the US Women’s Team up on the big screen,” I admitted with a sly smile of my own.  I have a huge crush on Alex Morgan.  She is so easy on the eyes.”

“There would be no sexy, athletic American women for you, my friend,” Lucifer set me straight with a wag of his finger.  “Just big, hairy, sweaty European men with way too much body hair and absolutely no interest in putting the little ball in the giant net.  In fact, you would spend all eternity without ever seeing a single goal scored during a football match.  Still think you could survive?”

I tossed my chicken wing down onto the napkin like I was suddenly sick to my stomach.

“That is just pure evil,” I assured him and then tried to wash the disgusting taste of soccer out of my mouth by chugging the rest of my Snapple.

“I’m very good at what I do,” The Prince of Darkness boasted.  “You might say I’m World Cup caliber.”

He laughed at his lame joke.

I rolled my eyes.

Then I opened my laptop and got back to writing real jokes.  Funny jokes.  The kind that got used on late night talk shows.

And weren’t about stupid soccer…

Native New Yorker who's fled to the quiet life in Maine. I write movies, root for the Yankees, and shovel lots of snow.
View all posts by Austin →
This entry was posted in Humor, Philosophy, Writing and tagged Alex Morgan, Football, hell, Humor, Modern Philosopher, Sarcasm, satire, short story, Soccer, The Devil, The Nite Show. Bookmark the permalink.

6 Responses to Blindside Blitz From Hell