No Room In Hell For Matt Damon

“Did you see that commercial?” The Devil asked from his end of the couch.

Even though I was hard at work on monologue jokes for this week’s taping of The Nite Show, it was impossible to block out the sound of the television.

He had the volume cranked like he was an octogenarian with dead batteries in both his hearing aids.

“What about it?” I replied without looking up from my laptop.

“There’s no way I’d go back to rescue Matt Damon,” Lucifer informed me nonchalantly.  “I’d let him rot on Mars.”

Obviously, the commercial has been for Damon’s new flick, The Martian, which had topped the box office this weekend.

He’d also brought up a point that got the Deep Thoughts flowing and had, momentarily at least, taken priority over the writing of jokes for Maine’s favorite late night talk show.

“Are you saying that because you’re evil?” I pressed.  “Or because you simply don’t like Matt Damon?”

The Prince of Darkness chuckled.  “Can’t it be both?”

He had a point.  There was no reason one couldn’t be evil and hate Matt Damon.

I took a sip of my Snapple because I really needed to ponder on this one like a proper Modern Philosopher.

“I’d probably leave him there, too,” I decided.  “The deficit is out of control, so how is the country going to afford to send a manned rescue mission back to Mars?  One man’s life can’t be put before the well being of an entire nation.”

“That’s a very logical answer,” Satan admitted with a Devilish grin.  “I was going to leave him there simply because he annoys me.  One less pretty boy actor in the world isn’t a bad thing.  He’s already won an Oscar, so what’s really left for him to do here on Earth?

“Well, the Oscar was for writing, not for acting,” I pointed out like the Film Major that I had been back at NYU. 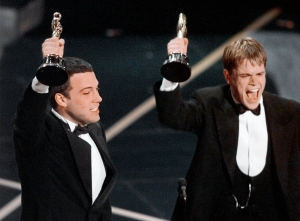 “Think of how sad Ben Affleck would be, though, if his best buddy didn’t come back from Mars,” The Devil said in a voice dripping with sarcasm.

“Do you think Damon wept when Ben didn’t make it home from saving the Earth in Armageddon?” I countered.

“I’m fairly certain Affleck survived in that movie,” Lucifer corrected me as he took a sip of his Snapple.  “I think he has a clause in his contract that states he must survive every film.”

“Hollywood pretty boy,” I mumbled and closed my laptop.

“Word!” The Prince of Darkness concurred as he flick an imaginary piece of dust off the leg of his impeccably tailored suit.

He acted like The House on the Hill was a haven for dust bunnies when it was, in fact, a much safer environment than Hell for his expensive wardrobe.

“Truth be told, we’ve already spent enough money and invested enough cinematic concern in the rescuing of Matt Damon,” I continued.  “How many beloved actors had to give their lives to save his Private Ryan?”

“Excellent point!” The Devil agreed with an emphatic clap of delight.  “We’ve already saved him from the Nazis.  If he was stupid enough to get left behind on Mars, then he has to accept whatever fate the Martians have in store for him.”

“Of course, he could unleash his inner Linus from the Ocean’s flicks and con the Martians into accepting him, or even taking him back to Earth,” my inner screenwriter proposed.

“Or he could go all Jason Bourne on Mars and save himself in a way that only a super solider spy with amnesia knows possible!” Lucifer added to my outrageous idea.

“He’s Matt Damon.  He’s wicked amazing and doesn’t need anyone to save him,” I declared in an over the top Boston accent.

We both laughed and then washed down the hilarity with some Snapple.

“After he abandoned us at the end of Good Will Hunting, I promised myself I’d never care about Matt Damon again,” The Prince of Darkness confessed sadly.  “How could he just leave us like that?  I did not like those apples!”

And so now I knew that there was no place in Hell for Matt Damon.  He had broken The Devil’s heart, and there was no way this Fallen Angel was going to allow himself to get hurt again.

Kudos, Matt Damon.  You’ve guaranteed yourself a place in Heaven.  That is, if the Martians don’t eat your soul first…

Native New Yorker who's fled to the quiet life in Maine. I write movies, root for the Yankees, and shovel lots of snow.
View all posts by Austin →
This entry was posted in Humor, Philosophy, Writing and tagged fiction, hell, Humor, Mars, Matt Damon, Modern Philosopher, Sarcasm, satire, short story, The Devil, The Martian. Bookmark the permalink.

5 Responses to No Room In Hell For Matt Damon