If Running Is Wrong, Then I Just Want To Write!

Getting up early to run, working all day, and then staying up late to write monologue jokes for tomorrow night’s taping of The Nite Show is really starting to take its toll, Modern Philosophers.

When you factor in that I’ve been doing it all after being bitten by the flu bug, it’s beginning to sound like I’m sort of superhero.

Or I’m turning into some freaky apparition that would scare the crap out of Voldemort should he pass me on the long, empty road.

Isn’t that photo from this morning’s run scary?  Does this mean that Halloween Season is finally in full effect in Maine?  Does it mean that my busy schedule is sucking the life out of me?  Or do I simply need to learn to take selfies in a better light?

Whatever the answer, it has been quite the day! 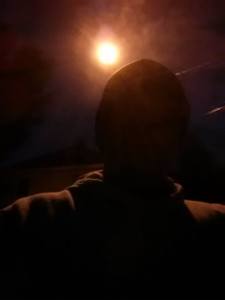 Somewhere, lost in the darkness of a 40 degree Autumn morning, stands your favorite Modern Philosopher.

It was cold, dark, and foggy this morning when I set out from The House on the Hill for my run.  Yes, I probably should have stayed in bed.  Yes, I was still sick and didn’t sleep well.

Writer Boy stayed up late working on monologue jokes last night, but Runner Boy would not use that as an excuse to miss run #66 of my running program.

Truth be told, I didn’t even realize how foggy and creepy it was out there until the sun had risen enough to shed a little light on my surroundings.

And don’t worry…my running toga is bright white, so the cars could easily see me on the road even though my camera couldn’t.

I’m not sure how I released my inner Voldemort this morning.  I’ve always sensed he’s been buried deep inside, but I assumed that my Witch friends had cast a few spells to keep Voldemort bound, gagged, and from ever showing his lack of a face.

Perhaps he momentarily escaped because my body and mind were both so worn down.  Maybe my inner Voldemort sensed there was a horcrux in the immediate vicinity.  I don’t think we’ll ever know.

At the moment, though, I can assure you I am as lovely and handsome as ever. 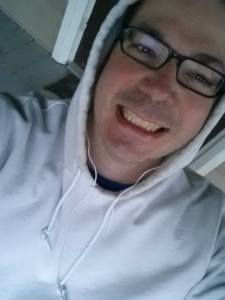 You see?  By the time I’d completed my run, the binding spells had regained control of my visitor who really should not be named, and sunlight had returned to Maine!

While I still didn’t feel very good, I couldn’t bring myself to call out sick because I’m leaving work early tomorrow and have Thursday off.

So I used my runner’s high to get me to work and then just hung on like a mad man for the rest of the day.

It was a difficult day.

My stomach made noises that were impolite in public.

I believe my inner Voldemort tried to escape.

Somehow, I managed to hold it all together.  Perhaps it had something to do with my no quit attitude that got me out of bed and onto the road this morning.

Maybe, just maybe, it was a little bit of lightning in a bottle…

That’s right, Modern Philosophers, I stopped for the Magic Elixir That Cures All on my way home from work.

The Snapple is chilling in the fridge, and I will need its potent powers for a little extra boost of energy and creativity later.

Because Writer Boy needs to deliver tonight.  And he can’t give in to the flu, exhaustion, or his desire to root on the Yankees in tonight’s Wild Card game.

He needs to focus.

Then he can pass out on the couch until Runner Boy decides it’s time to wake up for tomorrow morning’s run.

Hopefully, there will be a little time for the Yankees Fan in me to relax and enjoy the game.  Well, as much as I can relax when the Yankees are in the playoffs.

After all, if they lose tonight, the season is over.  And I’m not ready for that yet.

There just isn’t enough time in my day to schedule a goodbye to the Yankees, so they really need to win tonight and move on in the playoffs.

8 Responses to If Running Is Wrong, Then I Just Want To Write!