The Rise Of Cue Card Boy: The Nite Show Goes To Houlton 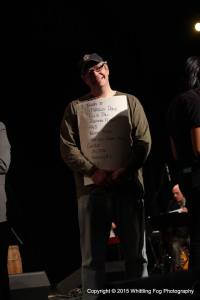 I am still recovering from yesterday’s exciting road trip to Houlton for a special taping of The Nite Show With Danny Cashman.

I wasn’t able to take as many photos and live tweet like I normally do, but that was due to  very special circumstances.

We’ll get to those in a minute, but I assure you that I did secure plenty of behind the scenes material to share with you, my faithful readers.

Now that you know The Nite Show is mobile, you should be campaigning for Danny to take it on the road to your town.  Let’s get those emails and tweets going!

Are you ready for an insider’s tour to last night’s special event?  Buckle up because we’re heading up to the Canadian border! 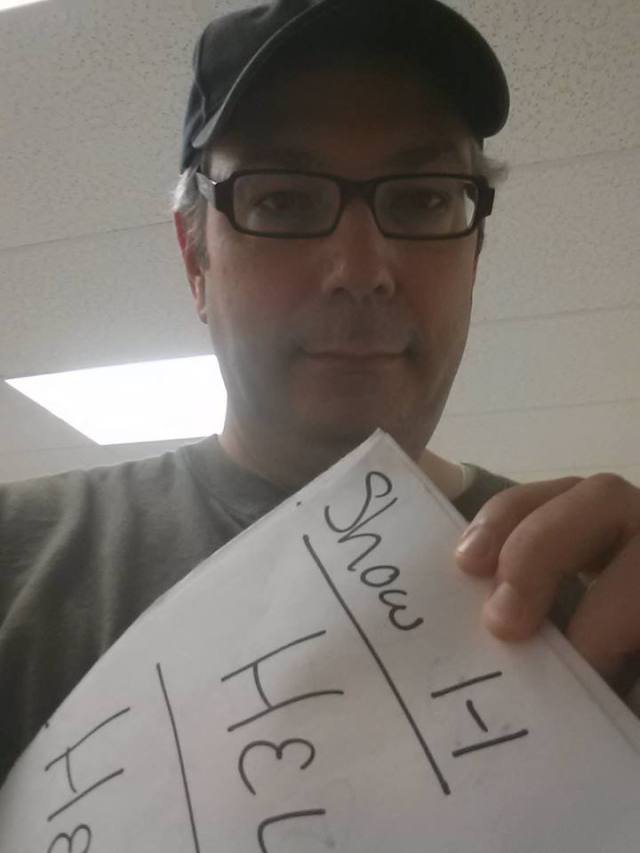 The reason I couldn’t do my usual live tweeting was because I had to fill in as Cue Card Boy last night.

When Danny asked me to take the gig, I assumed there would be at least a cape and a cowl for me to wear on stage.

While I was disappointed that there wasn’t a costume, it was still a thrilling experience that had me more than a little nervous from the start.

What if I dropped the cue cards or forgot to flip them at the proper time?  Worse yet, what if I walked in front of a camera while trying to get into position, or simply fell off the stage?

I am King Klutz, in addition to being Cue Card Boy, you know. 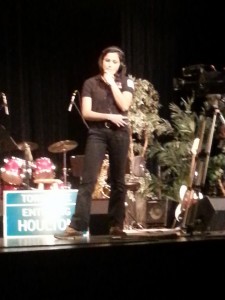 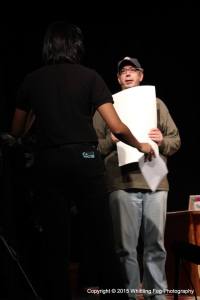 Luckily, none of the nightmare scenarios listed above came to fruition.  That was mostly because of Katie, the NESCOM crew member who served as Stage Manager last night.

I basically just followed Katie around, and she let me know when the camera was going to move so I wouldn’t accidentally step into the shot.

She was a very calming influence, and did an excellent job of keeping the show moving. 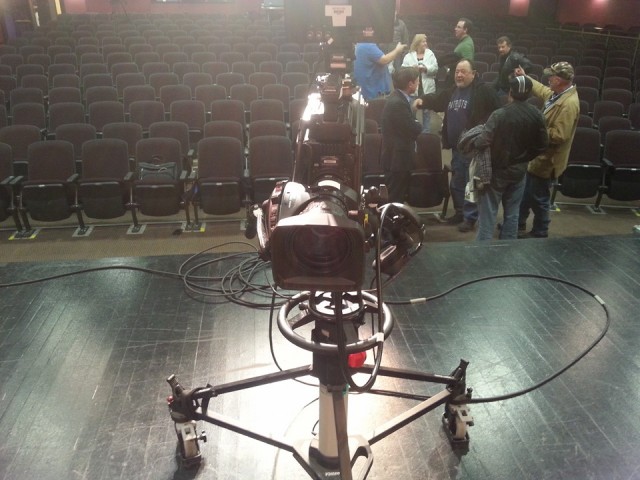 Since I was Cue Card Boy, I had a totally different perspective on things.  I have been on The Nite Show as a guest and appeared in two sketches last year.

This was the first time I was a member of the production crew, and it’s a whole new world up on the stage.  For one thing, it is damn hot under all those lights.

While it was all a little nerve wracking at first, it made for an entertaining night.

I love the above photo, which I took from the stage long after the show had ended.  Danny was still down in the audience talking to anyone who wanted a moment of his time.

Danny is the host of a highly rated TV show, but he really is just a regular guy, who appreciates the fans who come out to support The Nite Show. 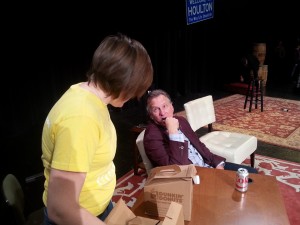 After the show, Joy, who is Danny’s Jill of All Trades, hosts a talk show of her own called The Later That Nite Show.  In this segment, she is interviewing musical guest Ellis Paul.

Of course, there is no second talk show, but this photo made it seem like Joy was taking over the show and chatting up Paul.

In reality, these two were my fellow road trippers.  Joy did all the driving and got us back and forth safe and sound. 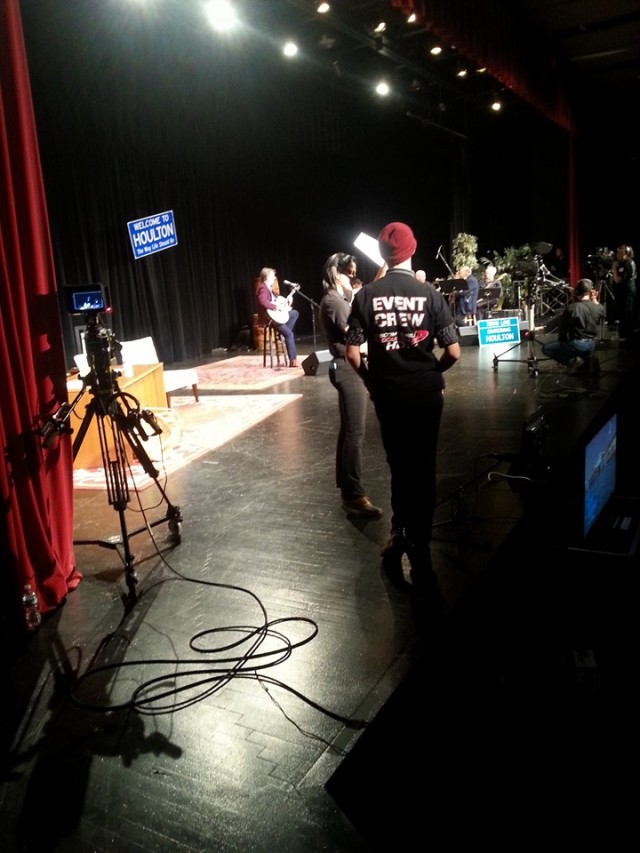 A shot from between shows taken from The Nite Show’s exclusive Cue Card Boy Cam.

Katie is on her headset telling the lighting guys that one of the lights is close to blinding her.  That was probably the same light that had me sweating bullets all night.

In the background, Ellis Paul is doing his sound check.  Paul, as he told us to call him, was a really nice guy.  I got to know him on the road trip, and he showed us this great photo of him in a Chewbacca costume.

How could I not like a guy who dresses up as Chewie to watch Star Wars with his kids? 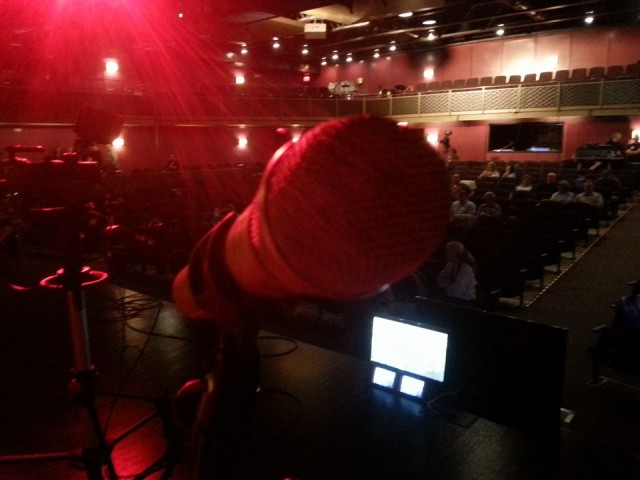 Ever wonder what Joe Kennedy’s view is like before he takes a seat next to Danny’s desk?

As you can see, there are three monitors at the foot of the stage that allow Joe to watch taped bits during the show.  Most importantly, they enable him to watch the open title sequence as he is doing his awesome announcer bit to start the show.

The theater reminded me of The Gracie in many ways, but it was larger and they allowed us to use the balcony.

It’s hard to believe that a theater this nice is located inside Houlton High School! 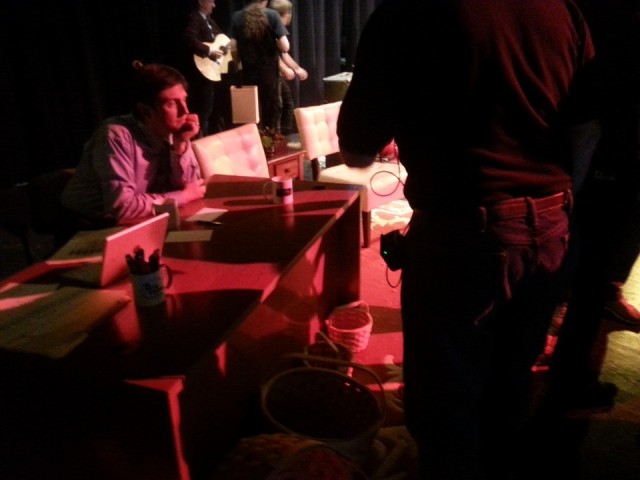 I wonder what Danny was thinking about in this photo taken by Cue Card Boy Cam between shows.

Maybe he’s wondering if Jimmy Fallon ever was bold enough to go to Houlton.  Perhaps he was pondering a trip across the street to Canada once taping wrapped.

Sadly, we will never know, but I was happy to see that he was lost in his Deep Thoughts like a true Modern Philosopher! 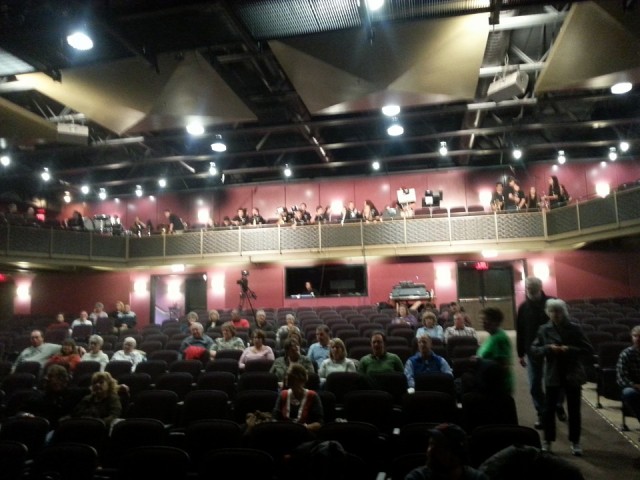 Here’s a shot of the theater from my perch on the stage before taping began.

That’s the Houlton High School Matching Band up in the balcony, and I was thrilled that they started off the show with the Notre Dame Fight Song!

As a huge Fighting Irish fan, I took that to be a good sign and that the Luck of the Irish would be with us all evening. 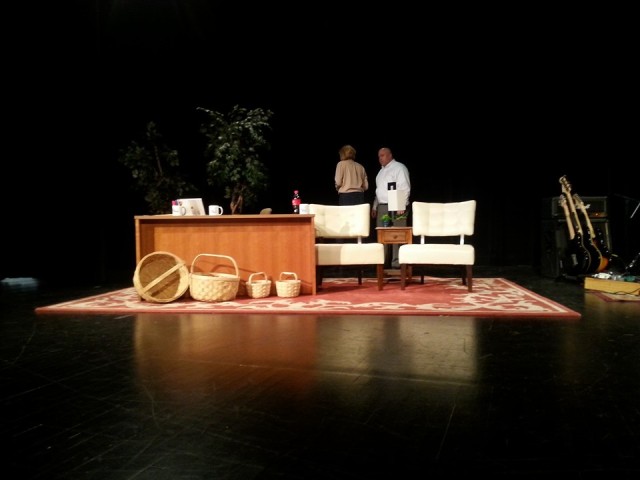 A shot of Danny’s desk, which was transported from The Gracie for the night.

Look, Mr. and Mrs. Kennedy are chatting it up in the background.  Perhaps they were talking about Joe’s awesome Halloween costume for the first show! 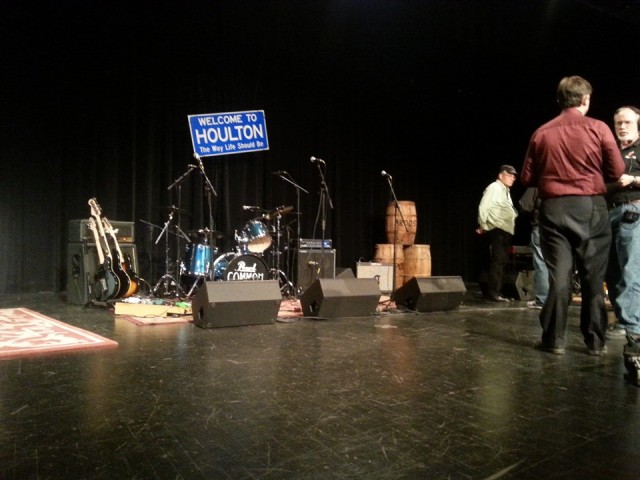 Set design included that crooked Welcome to Houlton sign that I wanted to straighten all night long.  What is wrong with me?

There were also those cool potato barrels.  The County is known for its potato production, for those of you not aware of where potatoes come from… 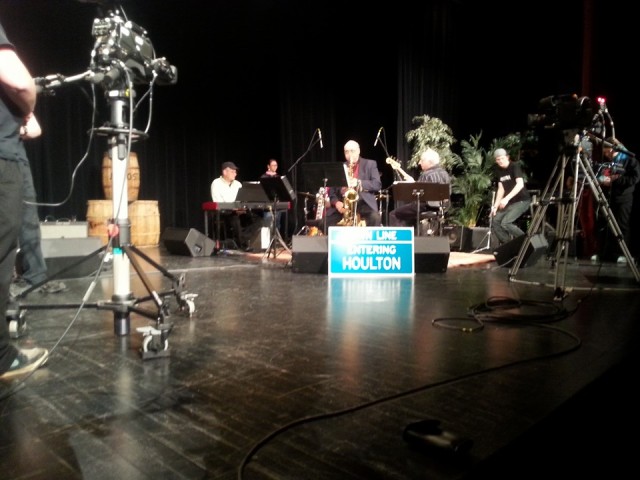 The Jump City Jazz Band is ready to rock Houlton! 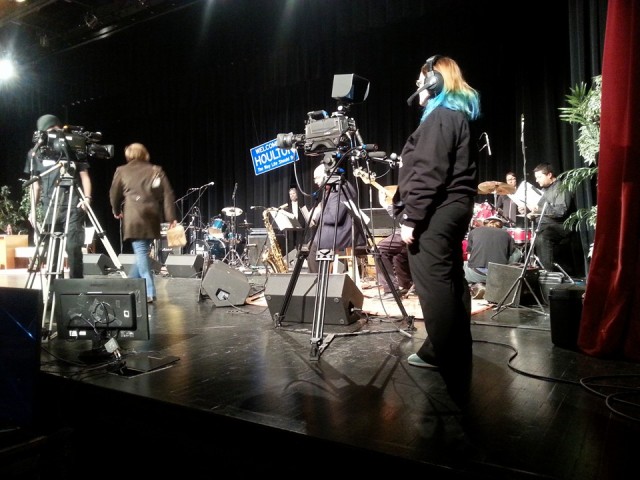 The NESCOM crew preparing to make television magic!  As always, the students from The New England School of Communications did an excellent job.

Still can’t believe they are only college students as they are so professional in how they carry themselves and produce the show.  Great work, guys! 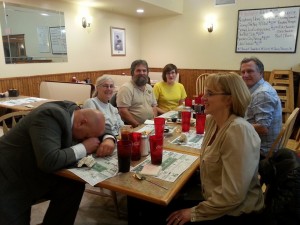 The night ended with several of us stopping for dinner at a local diner.  Apparently, Joe is in timeout for behavior unbecoming a TV sidekick.

Thanks, Danny, for picking up the tab!

So it was a great night.  I didn’t mess up the cue cards or injure myself up on stage.  The crowd was energetic and really seemed to have a great time.

Maybe it’s time for The Nite Show to make a trip to your town!

Special thanks to Jennifer Murphy, who just sent two photos of me as Cue Card Boy that I have added to the post!  What a team!

7 Responses to The Rise Of Cue Card Boy: The Nite Show Goes To Houlton