The Rain In Maine Is Sometimes A Sweaty Pain

It’s Sunday, Modern Philosophers, and I thought I should write a quick running post so you didn’t think that I’ve given up on my running program.

I am definitely still at it, and today was run #80 since I started exercising regularly again back in July.

That means I’ve been running 5 days a week for 16 weeks.  If you had told me back in July that I was going to be this dedicated to my wellness plan, I would have laughed hysterically.

Then I would’ve had to stop and catch my breath because I was so darn out of shape at that point.

I’ve still got a long way to go before I start getting regular modeling work again, but I’ve lost about twenty pounds to this point.

There’s been four bags of Halloween candy stashed in The House on the Hill since Friday, and I haven’t given any thought to busting into one.  So I am definitely doing something right, Modern Philosophers. 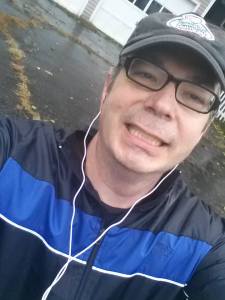 I don’t think I’d be much of a weatherman.

It was raining when I finally crawled out of bed this morning, so I decided to play around on the internet and wait out the storm before I left on my run.

Another good sign for my fitness plan: I didn’t postpone my run altogether because of the rain.  I just decided I’d put it off until the rain stopped.

I have no formal weather training and no meteorological equipment at The House on the Hill, so I was really just guessing that the storm had passed.

Shortly after I hit the road, it started to drizzle.  For the last mile, it poured.

By the time I made it back to The House on the Hill, I was soaked.  I had no idea where the rain ended and the sweat began.

No, I hadn’t had a drop to drink, Modern Philosophers.  Instead, I’d spent the day on a road trip to Houlton to tape two episodes of The Nite Show With Danny Cashman.

I didn’t end up going to bed until 2AM, I didn’t sleep well, and then I woke up way too early for someone who’d gone to bed well after midnight.

As a result, I felt like I was hungover.

Regardless of that bizarre feeling, I went for my run.

I run because I want to be healthy, feel better about myself, look more attractive to the single ladies, and build my self confidence.

You know, the normal stuff.

However, I also run because I never know when I’m going to be on stage in front of hundreds of people at a TV taping.

That’s what happened on Friday.  Danny asked me to handle Cue Card Boy duties, and suddenly I was a highly visible part of the production crew.

Sure, I’m still about thirty pounds from my goal weight, but I felt a lot better about being up there under the bright lights, with my butt on display for an entire theater to see.

It’s Week 16 of the Running Program and October is coming to an end.  That means the sun still hasn’t risen when I leave The House on the Hill for a run before work.

That is definitely a drag, and doesn’t make it easy to get out of bed, but I still do it.  I just put on a bright sweatshirt over my running toga so the cars can see me, and I run towards where the sun should eventually appear on the horizon.

I know it’s going to be difficult to keep up this 5 day a week schedule once Winter hits and the snow come, but I am going to keep at it as long as I can.

My hope is that my body will just become so used to the dark and cold that a little snow won’t be a problem.  Just another challenge that needs to be met. 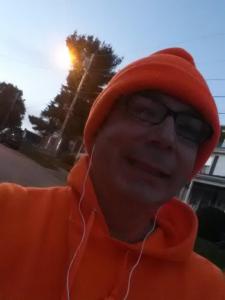 I haven’t forgotten that Halloween is just around the corner.

That’s why I dressed up as The Great Pumpkin for my run last weekend.  I like to keep it festive, Modern Philosophers, and I was secretly hoping that Linus would appear out of the pumpkin patch to run along with me.

It was a long, dark, rainy week, but I didn’t miss a single day of running.  I’m proud of myself, and I hope I’ve continued to inspire you to get active as well.

Happy Sunday.  Hope it’s been a sweaty one.

Native New Yorker who's fled to the quiet life in Maine. I write movies, root for the Yankees, and shovel lots of snow.
View all posts by Austin →
This entry was posted in Fitness, Humor, Philosophy and tagged dedication, Fall, Fitness, Humor, life, Modern Philosopher, rain, running, Sarcasm, satire, wellness. Bookmark the permalink.