Doc Brown Vows To Hide His DeLorean From Jeb Bush 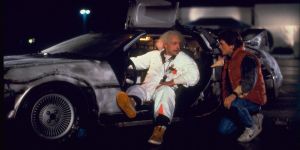 “Great Scott, Austin, did you hear what Jeb Bush said about time traveling to kill Baby Hitler?” Doc Brown shouted as he burst through the front door of The House on the Hill.  “It’s nut jobs like him that have kept me from sharing the joys of time travel with the general public!”

I glanced out the front door and discovered the DeLorean parked in my driveway.

“Is that going to be safe out there?” I asked nervously as I scanned the street for any sign of Jeb Bush or his supporters.

“Don’t worry,” Doc assured me as he paced nervously across my living room, “I checked and Jeb is at a campaign stop in Iowa.”

I joined Doc in the living room.  Watching him pace gave me motion sickness, so I sat down on the couch and grabbed a Snapple out of the cooler.

“I have to admit that when I saw his comments about killing Baby Adolph, I thought some crazy blogger was playing with the internet,” I told him as I held out a bottle of Snapple.

Doc waved off the iced tea and continued to pace. 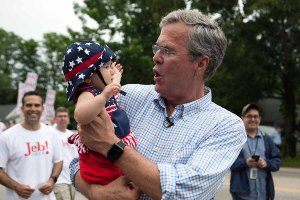 “Time travel is a gift,” he began a version of the same lecture I’d already heard so many times.   “When people talk about how they would use it to alter history, and commit acts of murder, it makes me realize that society is not at all ready to be given such a present.”

Doc really looked like Bernie Sanders when he was angry.

“When a high profile person, like a Presidential candidate, who is also the son and brother of former Presidents, says he would use time travel to murder a baby…a baby, Austin…well then, it makes me wish I had never invented the flux capacitor.”

I shot up off the couch.  “Blasphemy!”

I must have shouted that much louder than I’d intended because Doc actually cringed and stopped pacing.

“So you’d rather a spoiled, rich doofus, with delusions of grandeur got a hold of time travel technology and went all Bill & Ted with it on a most homicidal adventure?” 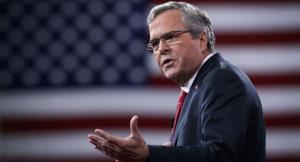 All we are is dust in the wind…dude!

I’d never heard Doc reference another time travel movie, so I had to give him props for the shout out to a classic flick.

“There’s never going to be a Doc & Jeb’s Excellent Adventure, or Jeb To The Future,” Doc stated emphatically.  “He can call and offer all the money in the world, but there is no way he’s getting his hands on the DeLorean!”

My eyes almost popped out of my head in surprise.

“Wait, Doc.  You’re telling me Jeb Bush has actually asked to use the DeLorean?”

“Why, of course, Austin, why do you think I’m so upset?” Doc answered and made some wild hand gestures for emphasis.  “Jeb’s been calling, his campaign manager, his annoying brother…I didn’t vote for W or his father.  They’re convinced that this crazy idea of having Jeb travel back in time to kill Baby Hitler is the key to his winning the election.”

“They might have a point,” I admitted with a shrug.  “He’s lost in Trump’s angry shadow and Carson’s sleepy eyes.  But he’s been all over the internet ever since he made that comment about murderous time travel.” 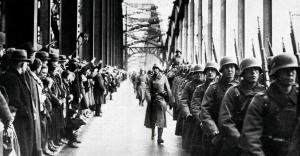 “Which is precisely why I cannot let Jeb Bush get his hands on the DeLorean!” Doc yelled as he ran to the window to make sure the vehicle was still in the driveway.  “I’ve been to the future, one where Jeb never becomes President, so I know he can’t be allowed to go back to 19th century Austria and commit this murder.”

“Because no matter how much of a monster Hitler was, nothing good can happen from altering history,” Doc reminded me for the millionth time.  “Even if it is to stop a madman from coming to power.”

“Is the madman in that scenario Hitler or Jeb?” I asked because I really wasn’t sure.

“Exactly!” Doc replied.  “If Jeb were to time travel back, kill Baby Hitler, and return to 2015, it would not only alter the last century, but it would also change the future as such a feat would all but guarantee Bush the Presidency.”

“Great Scott!” I shouted at the top of my lungs.  “We cannot have President Jeb.  That’s nearly as horrible at President Trump!” 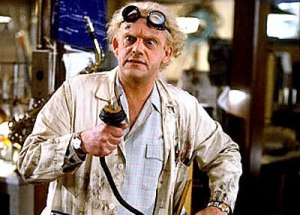 “I’m going to disappear for a little while to make sure the DeLorean doesn’t fall into the wrong hands,” Doc explained as he gave me a gentle pat on the shoulder.

“But where would you go?” I asked.  “Where would Jeb Bush never find you?”

“Vietnam during the Vietnam War,” Doc replied with a wink.

And with that, he was gone.  Selfless acts like this one, which save our country from a apocalyptic future, make Doc Brown my hero.

How about a ticket of Bernie Sanders and Doc Brown in 2016?  That’s a future I could live in quite happily.