The Sweet Irish Girl Goes To The Nite Show

I know it’s been a long time since I’ve done a Dating Tips post, so I thought I’d take a moment on this glorious Writer’s Day holiday to write one.

A lot of you have been asking lately: “How do I get a Sweet Irish Girl of my own?”

The answer is a lot simpler than you might think.  Get a job writing for a TV show, tell the Sweet Irish Girl of your choice that you write a TV show, invite her to a taping of that show, and then win her over by totally knocking her socks off with a behind the scenes tour and awesome seats for the taping.

If you can do that, you shall as happy as I, Modern Philosophers.

For those of you who prefer photos with your Dating Tips, here are some from last night’s taping of The Nite Show With Danny Cashman…

Here is The Sweet Irish Girl getting her first look at The Nite Show set inside the gorgeous Gracie Theatre on the campus of Husson University.

It really is an eye catching set, and once she saw it, I think it clicked just how real and professional this show is. 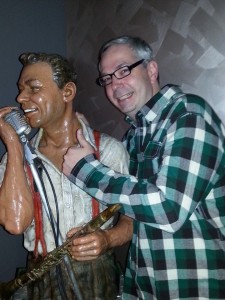 The first person we met was Joy (not pictured above), Danny’s awesome assistant.  She had seen all my Facebook posts about her visit, so Joy asked, “Is this The Sweet Irish Girl I’ve been reading about?”

I think that caught her off guard, but the real shocker happened moments later.  My friend Sheila, who attends classes at Husson, saw us walking into the Gracie and followed us in.  She said something along the lines of, “I have class, but I saw you come in here, and I finally had to put a face to all the photos you’ve been posting on Facebook!”

Turn your Sweet Irish Girl into a mini celebrity, and you are on your way to a good date.

Our next stop was backstage.  There, we got to chat with the delightful members of The Jump City Jazz Band, and Dave pointed out that he had seen The Sweet Irish Girl in my Facebook posts.

Danny took some time out from his busy pre-show prep to talk to The Sweet Irish Girl and share some stories about his recent trip to Ireland.

If you want to impress your date, Modern Philosophers, always get her a little one on one time with the star of the show and the band.  That’s going to score you some points!

Fellow Nite Show writer David Forbes Brown was a guest on the show last night to talk about the two books he’d written.

The Sweet Irish Girl decided to help sell copies of Dave’s books in the lobby before she show.  While she said this was her first ever gig as a book model, she looked like an experienced professional to me.

Get he a modeling gig, and you’re doing very well! 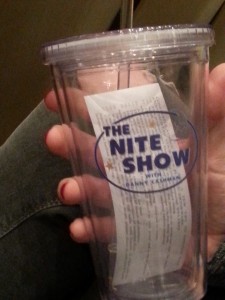 I made sure that Steve, fellow Nite Show writer and the man in charge of audience warm up, knew that The Sweet Irish Girl had come all the way from the Emerald Isle.

This piqued Steve’s interest, and he was soon seated next to my date, speaking to her in an excellent Irish brogue about life in Ireland.

She totally charmed Steve and was rewarded with a Nite Show cup for being the Most Beautiful Women in the Audience!

Awards like that really help you win a lass’ heart, Modern Philosophers. 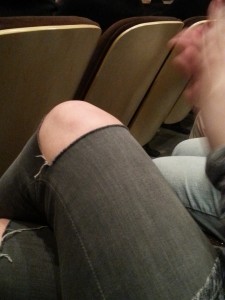 Here is a photo of The Sweet Irish Girl applauding a monologue joke that just so happened to be written by this Modern Philosopher.

Having her hear the host tell your joke, followed by the laughter from the audience is another sure fire way impress your date.

Maine broadcasting legend George Hale was a guest on the first show.  I was able to lean over and whisper in The Sweet Irish Girl’s ear about the time I was on George’s radio show to promote The Retirement Party.

Being able to tell your date that you were on the radio, had met a legend, and just so happened to sell a screenplay about your life that was then made into a feature film is also a really great way to woo her.  I highly recommend you do all those things. 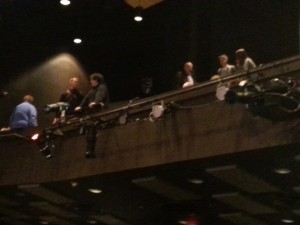 There were people in the balcony for last night’s taping.  That is not a usual thing, and I told The Sweet Irish Girl that Danny had to open the balcony because there was an overflow crowd of my friends who finally wanted to get a glimpse of her.

I know she didn’t believe me, but she still blushed.  Always try to make her blush… 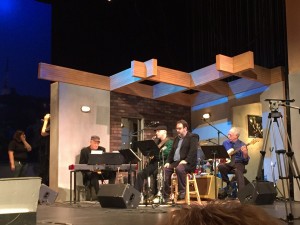 The Jump City Jazz Band.  As I mentioned earlier, I introduced The Sweet Irish Girl to the guys backstage before the show.

She was very impressed with their performance last evening! 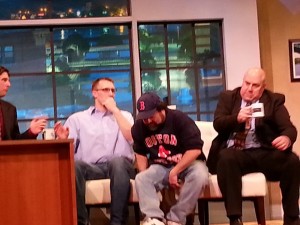 Fellow Nite Show writer David Forbes Brown was a guest last night.  The Sweet Irish Girl got into the blogging fun by taking the first two photos in this sequence.  She definitely has a good eye.

Dave came over between shows to meet her.  He said, “Is that The Sweet Irish Girl?  I recognize her jacket from your photos on Facebook.”

He then complimented my date by telling her that the quality of my blog posts has never been better since I started writing about her.

Introduce her to one of the guests, and then watch her blush as the guest flatters her.  This is how you really score points with your date, Modern Philosophers!

Hold hands with her during the taping from your seats in the second row.  That makes her feel special, and reminds her that you not only care, but you also have the pull to get such wonderful seats.

This might have been my favorite part of the taping, Modern Philosophers.

Danny told a joke, which happened to be the third one of my jokes he used in the third show, and it totally bombed.

The Sweet Irish Girl knew I’d written the joke because she had been reading it over my shoulder as I’d written it Tuesday night.

She giggled because she liked it and it was one of mine.  No one else really laughed, though.  So Danny took the cue card from Luke, shredded it right there on camera, and then tossed the pieces onto the stage.

I absolutely loved that my joke evoked such a reaction, and that the remnants of its failure remained on stage until the first commercial break.

During the commercial break, The Sweet Irish Girl turned to me and said, “I thought it was a great joke, babe.”

That’s all that really matters.  If she is still smitten when you fail, then the date is going very well.

The Sweet Irish Girl was a big fan of Danny’s headgear in this bit.  Now I will do everything in my power to swipe it from the Wardrobe Department for her. 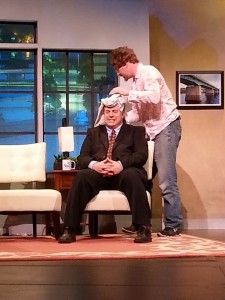 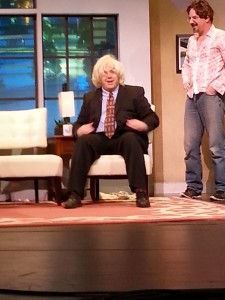 If you really want to find a Sweet Irish Girl of your own, Modern Philosophers, never forgot that these beautiful lasses come from an island overrun with Leprechauns, who impress them daily with their magic.

A surefire way to a Sweet Irish Girl’s heart is to surprise her with magic.  In this sequence, a little magic that would make any Leprechaun jealous, allowed Joe to once again have a full, luscious head of hair.

On the way home, ask your date if she had a good time.  If she looks up at you with big green eyes filled with pride and love, you know these Dating Tips have worked.