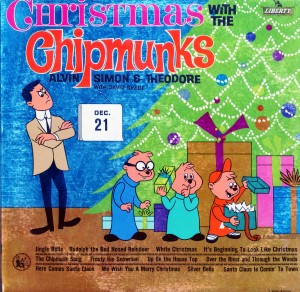 I had the weirdest Christmas flashback today, Modern Philosophers, and it involved singing rodents.

No, I hadn’t spiked my eggnog.

A coworker was playing Christmas carols at her desk, I was singing along, and I was suddenly transported back to Bay Ridge, Brooklyn at Christmas.

I was sitting in the front room, where we kept the Christmas Tree, and I was listening to Christmas With The Chipmunks.  That’s a picture of the album cover in the upper left hand corner of this post.

Ironically, the date on the album cover is today’s date.  I think something magical is going on here.  Did I actually time travel back to a Christmas of my childhood?

I remember we had this portable record player that we kept out in the front room, along with a meager record collection.  The Chipmunks might very well have been the most popular album in the bunch.

Every year at Christmas, I would drag out that record player and listen to Alvin, Simon, and Theodore since Christmas Carols.

Every year, it would crack me up to hear those squeaky voices sing Christmas classics that were usually performed with such reverence.

And that Alvin…always getting into trouble.  I wonder if Santa Claus every brought him the hula hoop he wanted. 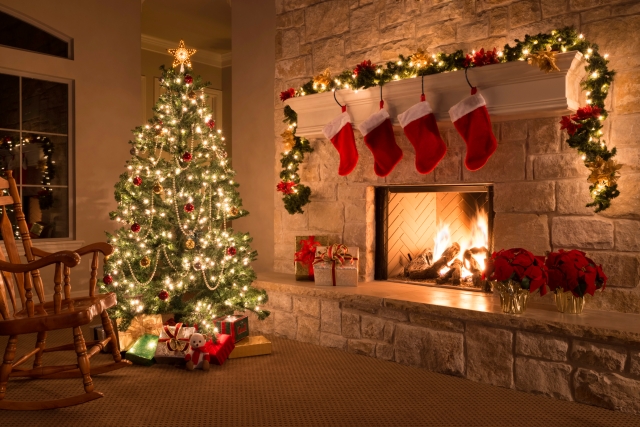 While I was time traveling back to Brooklyn in my mind to listen to the Chipmunks, I was also reminded of an odd Christmas tradition from my childhood.

We put up the tree, but my stepmother would not allow us to decorate it until Christmas Eve.  How bizarre is that?

Why bring a tree into our home, put it in that stand, water it every day, and chase the cats away from it constantly, but not decorate it?

I felt bad for the tree.  It was going to die now that it had been chopped from its roots, kidnapped from its home in the woods, and sold into a few weeks of servitude to a bunch of strangers with curious cats.

The least we could do was allow it to look pretty and grand.  Dress it up with baubles, decorate it with lights, and top it with a star or an angel.

I was sure our Christmas Tree could see some of the others of its kind in my neighbors’ homes.  It was probably wondering why it had to stand there naked, with three metal keys twisted into its truncated trunk, while all the other trees on the block were all dolled up. 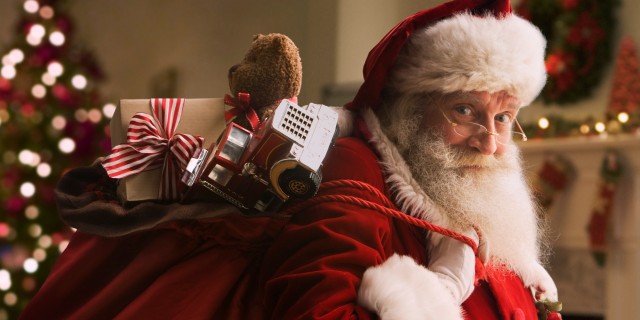 When I was younger, I loved to count down the arrival of Christmas and Santa Claus.

At first, I was like any normal kid, just crossing the days off the calendar.  Every morning when I woke up, I was one day closer to Christmas.

However, once we got under a week, things got a little weird.

I would obsessively keep track of the hours and minutes until it was midnight and officially Christmas.

And I wasn’t checking every few hours.  I was looking at my watch every few minutes.  I’m not joking, Modern Philosophers, it was weird, creepy, and way too much.

I’m not sure why I was so obsessed with Santa’s arrival.  It’s not like Christmas was ever this mega bonanza of incredible gifts in my house.

I guess maybe I was obsessed with the potential of Christmas.  There was always the chance Santa Claus was totally going to blow me away.

And that made Christmas exciting for a nerdy kid who loved numbers!

The one time Christmas came closest to living up to the hype in my overactive imagination was the year Santa brought us the Atari.

It was for my stepbrother, my little sister, and I to share, but it was still a very epic present, the likes of which my household had never seen.

That was the year that counting down the hours like a miniature Chipmunks loving, naked Christmas Tree watching, Rain Man finally paid off for me.

Playing Combat and Asteroids constantly was the most fun I ever had during Christmas Break.  I must have been a really good boy that year.

The more likely explanation, of course, was that my stepmother got a very good deal on an Atari game system.

Either way, it was a Merry Christmas!

Do you have any crazy Christmas memories, Modern Philosophers?  Did you ever listen to that Chipmunks Christmas Album?  What was the Christmas that really blew you away?