So much has gone on already at The House on the Hill, and I luckily had my camera crew on hand to record it for you.

However, the most exciting thing happened on my blog.  As you know, I am in love with The Sweet Irish Girl, but at her request, I have kept her true identity a secret.

She much prefers to be known by her secret identity, and truth be told, she looks damn good in the spandex and cape.

Much like Supergirl, though, My Sweet Irish Girlfriend is constantly at risk of having a Cat Grant come along and figure out who she really is.  So rather than have that secret hanging over her head, my Sweetheart caught me totally off guard and revealed her true self in the comments section of yesterday’s St. Stephen’s post.

Wait! Are you saying that your Sweet Irish Girlfriend is actually Supergirl???

Maybe she had a little too much to drink on St. Stephen’s Day, but that’s alright with me.

I finally get to refer to my girlfriend as Melissa, and I hope you will all give her a warm Modern Philosopher welcome.

Melissa is very private and still won’t allow me to post her photo.  Of course, she comments on this blog all the time and her avatar is her photo, so anyone can click on it, see her beautiful face, and even discover her wonderful blog.

What else is going on around here?  Well, it’s snowing…

It’s nothing too annoying, and it actually makes the neighborhood look like it’s finally prepared for the Holiday Season.

I have to admit, a gentle coating of snow is a good look for my street.

Unfortunately, it never stops at just an inch or two, does it?

There’s a much larger storm headed for Maine on Tuesday, and that’s really going to mess with my anxiety levels.

When it snows on the weekend, I don’t really mind since I don’t have to drive.  Tuesday, though, is a work day, so we’ll see how I handle that storm. 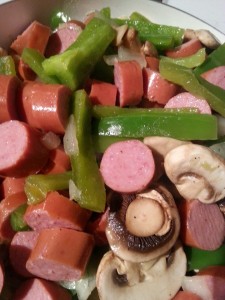 I thought I’d get a little cooking done before I went outside to shovel the white stuff.  I whipped up an easy, healthy favorite: sausages and peppers with mushrooms and onions.

Sometimes, I add tomato sauce and serve it over white rice.  This time, though, I might try it with a little brown gravy.

It turned out quite well.  I’m not a master chef, Modern Philosophers, but I know how to make enough meals to keep a little variety in my menu.

And, yes, I sent a total play by play of the process to Melissa in Ireland so that she knows her man can handle himself in the kitchen.

I’m sure she was disappointed, though, because she is of the mind that it’s not a proper meal unless there are potatoes involved.

That’s not me making an Irish joke, Modern Philosophers.  The girl loves her spuds!

It was time to initiate the new snow shovel.

I decided to wear my mask, even though it wasn’t that cold, in an attempt to scare the snow.  Maybe word will spread that a creepy man lives at The House on the Hill, and the snow from future storms will avoid my address. 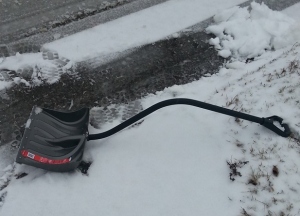 I can’t believe it.  The snow shovel is slacking off on the job already! 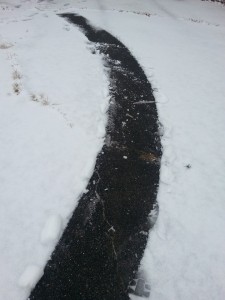 Progress!  That first path through the snow is always the hardest.  Once I can carve out that opening, the rest just falls into place.

Don’t you love how philosophical I can be about shoveling snow?

Mark and Brenda’s house still decked out for Christmas.  This photo can be their Christmas card for next year if they’d like to use it. 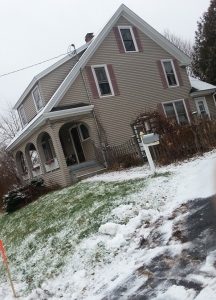 The House on the Hill rises above the snow.  I’m safely inside now, nice and warm, enjoying my favorite Sunday activity…

Rooting on the Jets.  Let’s go Jets!  Beat the Patriots!

You know all about my Sunday, Modern Philosophers, so tell me about yours.  Is it snowing out your way?  Be honest…how many of you had already figured out the true identity of My Sweet Irish Girlfriend?