In Sickness And In Snow 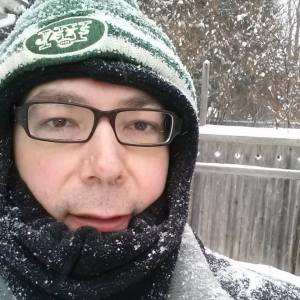 In this version, I’m David and Winter Storm Goliath will be tackling the role of Goliath.

I went to bed early last night, and set my alarm an hour early this morning because I wanted to leave for work before Goliath arrived and messed up the roads.

The Winter Storm Warning was in effect from 7AM until 2AM.  My plan was to be out of the house by 7:00.

The forecast was calling for 8-12 inches of snow, and it was basically going to snow the entire work day.

I wasn’t too thrilled with this forecast, given my well known anxiety of driving in snow, but I was dressed and ready to leave at 7:00 as planned.

David was going to show Goliath who was boss.

However, my stomach did not get the memo.  I thought that the sharp stomach pains and subsequent unpleasant bodily functions (no need to get graphic on a family friendly blog, but let’s just say I spent a lot of time in the bathroom) were just as a result of my anxiety.

Sadly, that does not seem to be the case.  After a long night’s sleep, I promptly took two long naps, in between bouts of severe shivering and a wretched headache. 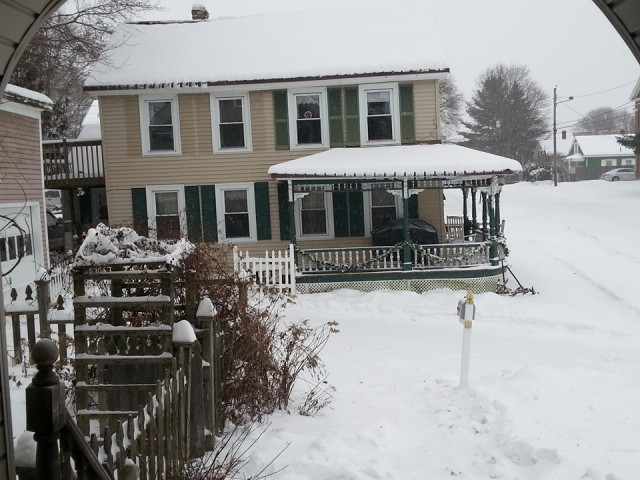 When I woke up from my second nap, the world outside looked something like this.  Only it was snowing much harder.

Sick or not, I had to clear the driveway if I planned to go to work tomorrow, and I didn’t want to wait until tonight after a foot of snow had fallen.

So I grabbed my shovel, bundled up, and headed out to face Goliath.

Maybe I should have brought a slingshot, too… 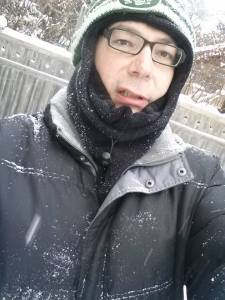 I’m never really up for shoveling the driveway of The House on the Hill because it is so long, wide, and steep, but I was definitely not up for the task today.

Now I understand why people have children.  You can hand them shovels and tell them to clear the driveway if they want their allowance.

Unfortunately, I hadn’t done this sort of family planning, so it was into the storm for me.

Goliath was even larger and meaner than they’d described.  I was definitely in over my head, and leaned on my shovel like it was a crutch. 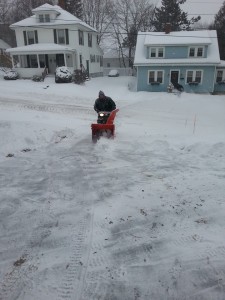 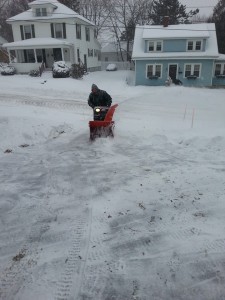 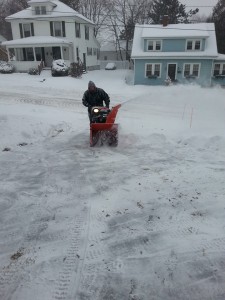 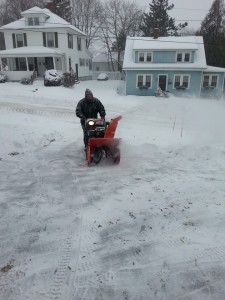 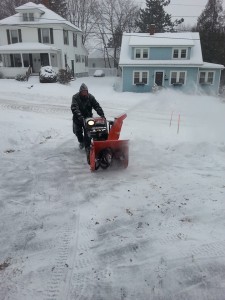 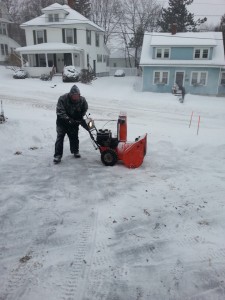 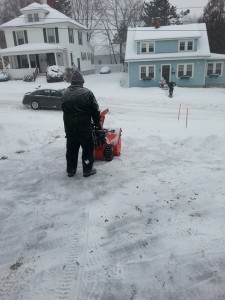 My neighbor Mark saved the day with his snowblower.  He did most of the work, but I did do some serious shoveling as well.

I tried to set up those photos so they’d play like a little movie.  Not sure if the effect will work on here, but it was very “Film Majory” of me.

An hour after all that hard work, the world looked like this.. 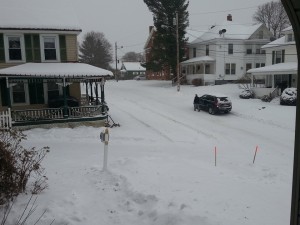 It’s been three hours since I started this post.  I’ve been on the phone with Melissa in Ireland.  God love her, she’s done her best to take care of me across the ocean, and I’ve been nothing but an annoying, flirtatious patient all day.

While My Sweet Irish Girlfriend is proud of me for calling out sick, as she knows I am notorious for refusing to do so, she is upset because I won’t go to the doctor.  I’ve been sending her photos of the snow all day, so she should understand why I’m not keen to head out into the storm only to sit in a waiting room for hours.

I’m just in from shoveling the driveway again.  There was a few more inches out there, plus the City Plow had buried the end of the driveway.  Even though I’m not well, I’d much rather get it done tonight than have to tackle it in the morning.

I tried to get a photo of me out in the snow, but it was rather dark… 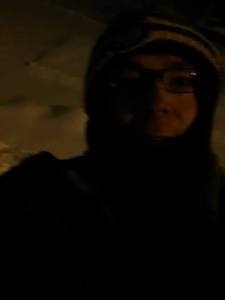 I’m in for the night now, Modern Philosophers.  It’s snowing again, but I am still sick and shouldn’t be out in 13 degree weather.

Goliath wins this round, but eventually, I will have my revenge.  Perhaps I’ll have better luck with Winter Storm Percival or Mildred.

It’s been a long day and I’m pretty sure we’ve established that I’m allergic to snow.

Did any of you have to battle Winter Storm Goliath today?  Was your outcome better than mine?  Isn’t it fun to shovel snow when you’re sick?

14 Responses to In Sickness And In Snow