In what many see as a last ditch effort to win the attention of American voters, Jeb Bush has arranged to become the centerpiece of the traditional New Year’s Eve Ball Drop in Times Square, Modern Philosophers.

The giant lighted ball, which is usually dropped to ring in the New Year, will spend the evening at home with Bush’s family.

Don’t worry, though, Modern Philosophers.  Bush promised to be lit, too.  He vowed to enjoy a case of Bush Beer before the drop to help both ease his nerves, and to make him appear more like a regular guy.

You know, like any other guy who allows himself to be lowered from a great height on a pole at midnight in front of millions of people.

“I’d like to see Donald Trump beat that!” declared a proud Bush supporter who had already claimed a spot on Fifth Avenue in front of the New York Public Library.

I didn’t have the heart to tell her she was in the wrong place. 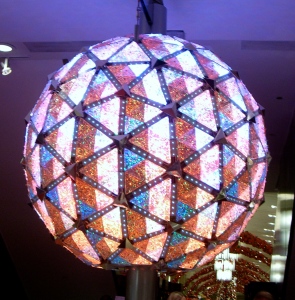 Jeb Bush (not pictured) is going to be the center of attention in Times Square on New Year’s Eve!

Recent polls show that Americans are more likely to vote for Will Ferrell, playing Bush’s brother, than for Jeb.

Jeb has not let this deter him.  At the last debate, he made a valiant attempt to stand up to Donald Trump, and managed to walk away without receiving noogies or an atomic wedgie.

Maybe Jeb is looking to let his balls drop both figuratively and literally as he fights to prove that he is tough enough to not only stand up to the Republican Party’s schoolyard bully, but to also lead the greatest country in the world. 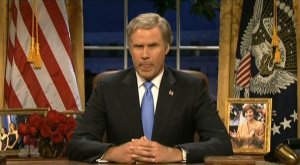 Jeb Bush (still not pictured) trails Will Ferrell posing as his brother in the polls.

New Yorkers appear to be okay with this change in the New Year’s Eve line up.  I had a chance to speak to some of them as I wandered around my old stomping grounds today.

“I wanna see if he freakin’ bounces when he gets to the bottom!” declared Rosa from West 147th Street.

“Personally, I think Donald Trump would be the greatest President this country has ever seen.  If little Jebbie wants to resort to Jackass style stunts to win over a few drunks who won’t remember to show up at the polls on Election Day, then I say give the people what they want,” volunteered Donald Trump.

“Who’s Jeb Bush?” asked the hot dog vendor on the corner of 42nd Street and 8th Avenue.  “You want kraut with that?  It’s extra.” 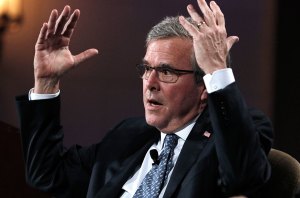 Jeb Bush practicing how to fall safely in preparation for New Year’s Eve.

“I think it’s going to be a whole lot of good, clean American fun!” Jeb Bush informed me after I had finished my hot dog (I got the kraut, by the way).  “This campaign has been way too negative, far too hate mongering, and totally too focused on Donald Trump.  It’s time to inject a little Jeb-ulation into this situation.”

I had no idea what he meant by Jeb-ulation, but he bought me another hot dog, so I just smiled politely and promised Jeb this would all go into my blog post.

“People don’t realize that 2016 is a whole new year,” Bush continued.  “Once the new year starts, we’re all at zero percent of the vote again.  2016 is a leap year, so that gives me an extra day to round up more supporters.  It’s going to be my year.  The Bush Family has a legacy of winning elections in even numbered years.  This is my destiny!” 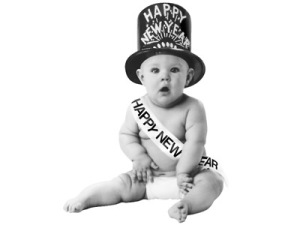 Jeb Bush would neither confirm, nor deny that this was a baby photo of him.

New Year’s Eve is scheduled to take place tomorrow night all across the world.  For more information on Jeb Bush’s Presidential campaign, you’re going to have to do a little digging because there hasn’t been much reported about it to this point.