A long time ago, in a galaxy far, far away, an epic story unfolded that would become the basis of one of the highest grossing movies of all time, Modern Philosophers.

In the present day, however, the members of the Academy of Motion Picture Arts and Sciences decided not to bestow a Best Picture nomination upon this film.

Nor did it nominate any of the film’s cast for an Oscar.

The movie was Star Wars: The Force Awakens.

The force the Academy awakened was Kylo Ren.

“How in the world could this Academy not nominate our film for Best Picture?” Kylo Ren demanded of this Modern Philosopher from beneath his sinister mask.  “Take me to this Academy so I might bring upon its halls the devastation of The Knights of Ren!”

I had insisted that this interview take place far from The House on the Hill, because I knew all about Kylo Ren’s anger and how well he was able to express it with his lightsaber.

There was no way he was going to bring the power of the Dark Side to my house, even if I totally agreed with him about The Force Awakens getting screwed. 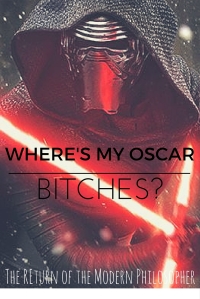 “Who are the members of this Academy?” he bellowed in that raspy voice that was not at all pleasant to my ears.  “Are they Jedi?  Even if they are, they will be no match for the anger they have awakened within the darkest reaches of my soul!”

While my guest completely trashed the room with his mighty weapon, I enjoyed a Snapple and waited for him to tire himself out so we could continue the interview.

“Really, though,” he said once he had removed his helmet, brushed his luxurious locks, and had a sip of Snapple, “how could they overlook our film?  J. J. did amazing work.  The fans clearly love it.  What gives?”

How in the world did The Force Awakens not snag a Best Picture nod?  The Force is strong with this flick, and it deserved the nomination.  It’s even more of an oversight when you consider that the Academy can name ten nominees in this category, but decided to go with only eight this year.

“I sense a disturbance in the Force,” Kylo Ren growled as he flipped through the latest issue of Daily Variety.  “I’m not saying these other motion pictures aren’t deserving, but wouldn’t more people watch the Academy Awards if The Force Awakens was up for some big awards?  Take me to the Academy immediately.  I want to reach inside their minds and see what secrets they are hiding!”

He reached for his helmet and weapon, but I nodded that he should not do so because our interview wasn’t even close to being over.

To my surprise, he backed down.  Had I just used the Jedi Mind Trick on Kylo Ren?

I decided to change the subject in hopes of keeping him calm.  I asked him what he thought of the Acting nominations. 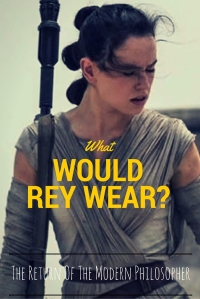 “How was it that everyone in The Force Awakens was overlooked?” he shot back.  “Was Rey not a revelation?  Does she not deserve to be in a spotlight even brighter than the unrelenting sun of Jakku?”

Then he stunned me, Modern Philosophers, by showing a very witty sense of humor.

“Perhaps they were afraid she had nothing to wear to the ceremony!” he quipped with a chuckle.  “That tattered desert garb wouldn’t exactly look chic on the red carpet, now would it?  What are you wearing, Rey?  Are those rags from the tattered uniforms of slain Rebel soldiers?”

Okay, his humor was a little dark, but I still appreciated it.

“And in a year where there are no nominees of color, do you really mean to tell me that Finn, traitor that he is, doesn’t deserve some recognition?” Kylo Ren continued as he reached for another Snapple.  “He really ran the gamut of emotions over the course of the movie, and he almost made the audience believe that a total novice could have defeated me in a lightsaber duel.  That alone is Oscar worthy!”

I was going to point out that the other novice, the one in the rags, ended up kicking his angst ridden ass in a lightsaber duel, but I didn’t want to watch him tear up the room again.  So I kept those Deep Thoughts to myself.

Did Kylo Ren think that he should have received an Oscar nomination?

His reply was to put on his helmet, grab his weapon, and rise to his feet. 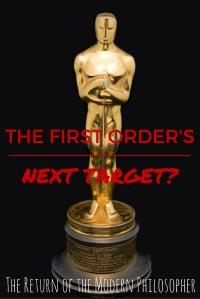 “While this discussion has been delightful, it has not changed my mind about destroying Hollywood,” he growled in that annoying bad guy voice.  “As we speak, The First Order is preparing a new, even deadlier weapon, whose first target will be Hollywood!”

I asked if the new weapon happened to be a planet with a death ray capable of destroying other planets.

“Are you a Rebel spy?” he bellowed.  “Have you been reading my thoughts?  Your garment looks quite similar to the robes of a Jedi.  Are you one of them?”

He powered up his lightsaber and pointed it at me.

I told him to search his Deep Thoughts about his questions, take a few cases of Snapple back to his new secret base, and then offered my condolences on The Force Awakens getting shafted by the Academy.

Kylo Ren responded by turning off his lightsaber.  “Your mind is hard to read because there are so many thoughts bouncing around inside your head, but I do not believe you are a threat.  I shall let you live.  But I will take all the Snapple.”

We shook hands, and he promised to come back to do a follow up interview after he had destroyed Hollywood.

Hopefully, he brings Rey next time… 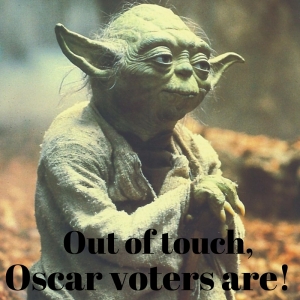 Do you think The Force Awakens deserved to be nominated for Best Picture?  Were you surprised that it didn’t receive any nominations in the major categories?  Do you sense a disturbance in the Force in regards to this year’s Academy Awards nominations?

Native New Yorker who's fled to the quiet life in Maine. I write movies, root for the Yankees, and shovel lots of snow.
View all posts by Austin →
This entry was posted in Humor, Philosophy and tagged Hollywood, Humor, Kylo Ren, Modern Philosopher, Oscars, Rey, sarcasm, satire, Star Wars, The Academy Awards, The Force Awakens. Bookmark the permalink.