Republicans Debate For The Right To Be Your Valentine 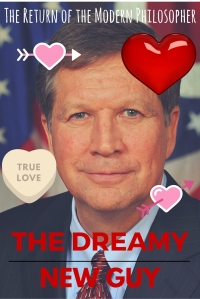 It’s the night before Valentine’s Day, Modern Philosophers, and the Republican Presidential Candidates are going to show you how much they love you.

In hopes of being your Valentine, the Republicans are getting together for an old school debate to win the right to your heart.  And your vote.

Does it get any more romantic than that?

In an election that has seen a Republican field larger than the number of contestants on The Bachelor, let’s meet the candidates who are vying to receive a rose from you…

John Kasich.  The Governor of Ohio come out of nowhere to post a surprising second place showing in the New Hampshire Primary.

Everyone loves the dreamy new guy, so this makes Special K, as I’ve dubbed him for no apparent reason, the eye candy most likely to woo undecided voters.

Sure, his name is difficult to to spell, and he had been written off before New Hampshire (and by that I mean that he had never appeared in a post on this blog before this one!), but look at that smile.

He’s a dreamboat in a political ocean filled with gaudy yachts and sinking ships.

Donald Trump.  The winner of the New Hampshire Primary and second place finisher at the Iowa Caucus is by far the richest candidate in the field.

What voter wouldn’t want a rich Valentine to shower her with expensive presents, the finest chocolates, and the promise of a wall built around her to keep out the other Republican candidates?

Trump might be a sexist, buffoon, hate monger, but he is also the only candidate to admit that he could shoot a person in cold blood and not lose a single vote.

Don’t you want a Valentine who can keep you safe?

Ted Cruz.  Who wouldn’t love a Valentine’s Day Cruz?  Tenacious Teddy won the Iowa Caucus, but finished a disappointing third in New Hampshire.  While everyone expected Trump to win the primary, no one saw Cruz falling behind an unknown for the bronze.

Did New Hampshire mean that voters are so over T-Bone, or are they simply playing hard to get?  Games can be fun on Valentine’s Day, right Ted?

Sorry, Modern Philosophers, but I’m not sure Senator Cruz knows what fun is.  Do you think you could show him if you pick him to be your Valentine?

Marco Rubio.  I was going to list Senator Rubio third in this post, but I feared he would mistakenly take that to mean he had won, and immediately try to move into the White House.  Third is not first, Marco (Polo!), remember that!

After finishing third in the Iowa Caucus, Marco (Polo!) declared himself victorious in a rousing speech about how things were going to be when he was President.

He then got his butt handed to him by a fat man at the last primary, and was mocked on late night talk shows as a robot programmed to recite only one line.

He tanked in New Hampshire, and in that speech, blamed his poor finish on his horrible performance at the debate.  It was cool of you to point the finger at the guilty party, Marco (Polo!), and I look forward to seeing how the other candidates plan to embarrass you at tonight’s debate.

Jeb Bush.  There once was a man name Jeb!, who was cursed to follow in the footsteps of his father and brother even though America clearly does not want another Bush in the White House.

His fourth place performance in New Hampshire has given Jeb! some hope, but he’s the kind of guy who shows up at your door on Valentine’s Day and begs you to be his Valentine so he doesn’t look like a lonely loser.

It’s up to you, Modern Philosophers.  Are you going to take pity on Jeb! and agree to be his Valentine, or are you going to slam the door in his face and sic the dog on him?

Enjoy the debate.  May the best candidate be your Valentine!