I Need To Be A Better Socialist

If Bernie Sanders were my Life Coach, Modern Philosophers, I’m certain he would point out the obvious fact that you can’t have Socialism without the social.

There was a time in my life when I was a much more social person.  That was before my psyche and self-confidence had to take out a restraining order against life because of the constant assault and abuse.

Now, I long for the creature comforts and familiar surroundings of The House on the Hill.  Why I wouldn’t say I’ve become a hermit, I’ll admit to being reclusive if that means Rey will seek me out like Luke Skywalker.

Because no matter how cut off I want to be from the world, there’s always room for Daisy Ridley in my basement bunker.

The more I listen to Bernie Sanders, and the more I hear people talking about his being a Socialist, the more I realize that I need to pay more attention to my social network.

At this point, there aren’t any friends request pending, nobody is poking me (or I them), and the only thing trending is loneliness.

So as I sat at my desk today, gnawing at the chains that keep me tethered to my desk, I managed to form the Deep Thought: “What would Bernie do?” 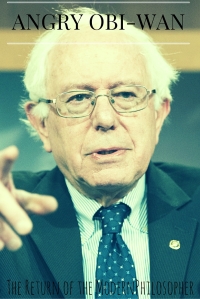 In my mind, that confused mess with so many thoughts, ideas, stories, and fears crashing around inside, Bernie did his best Angry Obi-Wan impression and told me, “Search your feelings, Austin.  You need to be more social.”

As always, Modern Philosophers, Bernie was right.  Not only could I feel the Bern, but it also left a mark right there on my battered, lonely soul.

I decided that I would break from my normal, safe, boring routine and accept a dinner invitation from a friend I hadn’t seen in far too long.

Catching up is fun.  I don’t realize how many stories I have saved up in my head until someone asks me what I’ve been up to since we last spoke.

I blabbered away at poor Bethany for what seemed like hours, but she asked, so it’s her fault the dam burst and months worth of tales exploded out into the restaurant.

Work has not been the same since Bethany abandoned me, so I regaled her with some stories of the office, caught her up on things with Melissa, and discussed my recent writing successes.  I was happy to hear that she’s been keeping up with my blog posts, and promised to send her a celebratory toga.

Even thought I’m a horrible Socialist, I did remember to share the wealth and ask her about her new job and life at home.

I probably did dominate the top one percent of all the stories told this evening, though, so I will have to do a better job on my Socialism skills.

However, I’m proud to report that I shared the highly coveted fried pickles, and made Bethany promise to drag me out of the house more often.

I wish I could tell Bernie Sanders all about my attempts to be a better socialist, but I know he is extremely busy tonight with the Michigan and Mississippi Primaries.

Hopefully, my efforts will inspire Bernie in the polls.

Sometimes, when Bernie loses a race to Clinton, I wish he would unleash his Angry Obi-Wan and use the Jedi Mind Trick on voters.

Then I realize that Bernie would scold me and say that wasn’t the Socialist way.

Messing with a voter’s free will is totally something Darth Trump would do, but not our Socialist Jedi!

Want to help me be more social?  Follow me on Pinterest!  We all know that’s what Bernie would do…

4 Responses to I Need To Be A Better Socialist