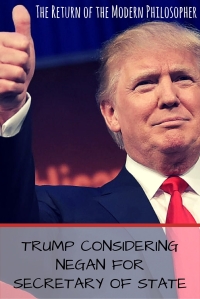 In a press conference held outside of Trump Tower, the Belligerent Billionaire announced that he has made a choice for Secretary of State.

At that point, one of Trump’s minions handed him a very familiar looking baseball bat wrapped in barbed wire.

“I was watching The Walking Dead yesterday,” Crazy Hair and Crazier Words continued.  “People think I’m not relatable.  That I don’t relax like a normal guy.  Now I don’t normally watch The Walking Dead because I thought it was a documentary about President Obama, but then my beautiful wife told me it was about zombies.  That made me think it was about Ted Cruz and his supporters.”

He paused for laughter that didn’t come until he held out the menacing weapon in his right hand.  Then everyone chuckled nervously.

“I watched that show and I told my people to get me Negan.  He knows how to command a room.  He knows what has to be done to neutralize a threat.  You think I’m a great negotiator?” he asked no one in particular.  “Negan might be even better than me.  Hard to believe, I know, but there’s a chance it’s true.  He’s what I want in a Secretary of State.  That’s the man I want telling ISIS how it’s going to be.”

Trump took a mighty swing with, what I hope, was merely a prop Lucille. 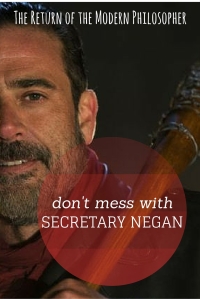 “Sometimes diplomacy isn’t about giving in to the enemy.  That’s how we got stuck with that idiotic Iran deal,” Trump growled.  “That never would’ve happened  on my watch.  And it’s not going to happen with Secretary of State Negan at the negotiation table.”

Trump then explained that he would allow Secretary Negan to employ his Saviors as independent contractors.

“That way, our soldiers aren’t putting their lives on the line to fight an enemy that should’ve been vanquished already. Thanks, Obama!  I’ll bring our troops home.”

Future President Trump also said he looked forward to seeing Vladimir Putin’s face the first time he arrived at a summit with Negan at his side.

“Putin can enter shirtless on the back of a mighty steed if he wants.  I don’t get the guy.  Does he want the world to think he’s crazy?  Or is he just crazy?  I don’t know.  I don’t care to be perfectly honest.  I’m just going to tell my Secretary of State to literally knock him the hell off his high horse and then we’ll see who’s the true world power.”

Trump slammed his bat against the sidewalk for emphasis, but nearly lost his grip on it because his hands are so damn small.

“We’re going to make America great again!” the man the Republicans don’t want to be President promised for the ten millionth time in the last eight months.  “Between my negotiating style and Negan’s, the rest of the world doesn’t stand a chance!”

Negan was not available for comment seeing as how he is a fictional character.

Native New Yorker who's fled to the quiet life in Maine. I write movies, root for the Yankees, and shovel lots of snow.
View all posts by Austin →
This entry was posted in Humor, Politics and tagged 2016 Presidential Election, diplomacy, Donald Trump, Humor, Modern Philosopher, Negan, Politics, sarcasm, satire, Secretary of State, The Walking Dead. Bookmark the permalink.

5 Responses to Trump Considering Negan For Secretary Of State