Where In Hell Do You Work? 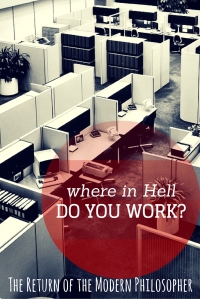 It was a gorgeous Spring Sunday, so they decided to sit out on the front porch of The House on the Hill and soak up some rays.

Austin wore his usual toga and a beat up pair of sunglasses that sat crooked on his face.  The Devil wore an impeccably tailored suit and a designer shades.

They made quite the pair.  In fact, if you had walked past the charming house at some point this afternoon, you most certainly would have done a double take.

Austin groaned and reached for his Snapple.  He took a very long sip, but made sure not to gulp his drink as he had been warned that doing so was not at all good for him.

“Afraid so,” the handsome blogger replied as he set his bottle on the table between them.

“It was weird not to see you for two weeks,” his guest remarked.  “Are you ever going to tell me what you did on your vacation?”

“No,” the writer answered as a thin smile grew on his lips.

The oddest of odd couples sat in silence and allowed the May sun to work its magic.  After a long, harsh Maine Winter, an afternoon like this was like a gift from Heaven.

The Prince of Darkness raised an eyebrow to that choice of words, but remained silent.  He was having too much fun doing nothing to suddenly do something about it. 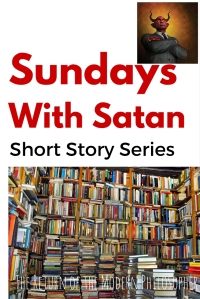 “I know exactly what you did, Mr. Secretive,” he revealed with a chuckle.  “There’s no need to play coy with me.”

“Then why are you bothering me with questions about knowledge you already claim to have?” Austin countered.

This sort of witty back and forth between the pair was exactly why people came back every Sunday night to read about their clever adventures.

“Because I thought you might want to man up and talk about it instead of keeping it all buried deep inside with all the rest of your feelings,” Satan taunted.

“I’m good,” the cocky writer quipped as he reached again for his Snapple.  “In fact, I’m really good and I don’t want to do anything to ruin that feeling so let’s drop the subject.”

“Can I at least tell you that I’m happy for you?” The Devil asked sincerely.

“Thanks, dude.  Much appreciated.”  He tipped his bottle at his guest in a salute and then took another sip of his Snapple.

“Back to work tomorrow then?” the sharp dressed man in the expensive suit queried.

“Afraid so,” answered the once gloomy guy who hadn’t felt this happy in a very long time.

Hell, he was in such good spirits he didn’t even care that he had to go back to work.  Great things awaited him, and the only way to get to that delightful future was to travel through some days that included time in the office.

He finished his Snapple and reached for another one.

Native New Yorker who's fled to the quiet life in Maine. I write movies, root for the Yankees, and shovel lots of snow.
View all posts by Austin →
This entry was posted in Humor, Writing and tagged back to work, fiction, hell, Humor, Modern Philosopher, Relationships, sarcasm, satire, short story, The Devil, vacation. Bookmark the permalink.

5 Responses to Where In Hell Do You Work?